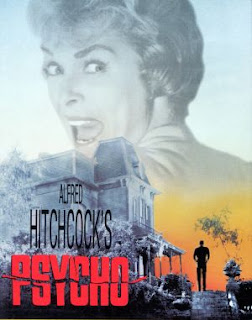 Pheonix, Arizona. Bank employee Marion steals 40,000 $ intended as a payment for a real estate deal and runs away with her car to a distant motel run by a sensitive lad, Norman Bates, who lives in the nearby house with his mother. But that evening, while she was taking a shower, Marion was stabbed to death. Other guests come to investigate the event: detective Arbogast gets also stabbed to death, but Marion's sister Lili and Sam discover that Norman's mother is actually dead and that Norman has a split personality, killing women because he imagines that his mother is jealous at them. Norman gets arrested.


"The audience was not interested in the message of the film. The audience was not excited by brilliant acting. The audience was not enchanted by the the reputation of the novel. It was excited by pure film. That's why I'm proud of "Psycho" - because it's a film that belongs to us, the cineast", perfectly summed up the master of suspense in the interview with Truffaut in his book "Hitchcock". A magnificent masterpiece, "Psycho" is one of the most influential and hyped movies of Alfred Hitchcock's later career - here he leads even today interesting and undated moments, whose basis lies in the deep profile of the killer and stimulates the viewer to think. Hitchcock and the screenwriter Joseph Stefano frighten a lot, but they never do that in a banal way, but add humor while the ending is brilliantly focused and explains the psychology of the killer, so that everything has it's why and because. The most famous scene, the one with the murder under the shower, is pure black poetry as well as it "erases" the fake main protagonist, Marion, and presents a new one, Norman Bates, which may be the only unbalanced transition of the story, yet is stylistically inventive and original. Some of the dialogues and acting are shaky, but the style, the plot twist at the end and the bravura direction are so intense that they even change them towards their advantage, which make the film fresh even today. Janet Leigh won a Golden Globe as best supporting actress, while she was also nominated for an Oscar together with set decoration, cinematography and Hitchcock as best director, who should have won that award, but it went to "The Apartment".