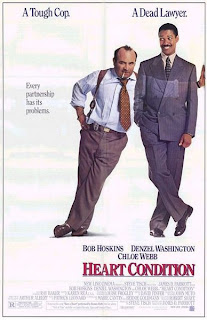 A respectable senator dies from a drug overdose and in the company of prostitutes, and the African American lawyer Stone is involved in the case. At the same time, cop Jack is a walking cliche: he smokes, drinks, swears, eats too much junk food, is divorced and - is a racist. When he attacks Stone one evening, he gets fired and gets a heart attack. But he survives thanks to a heart transplantation - only to find out he got Stone's heart, who was killed. Now Jack can see Stone's ghost who demands his killers must be found. Jack unwillingly accepts, but finds Stone's unknown son and brings his killers to justice.

A long time ago, Bob Hoskins played a gangster in the masterful crime film "The Long Good Friday", while in the mediocre fantasy comedy "Heart Condition" he decided to play an opposite kind of role, that of a cop, yet that tame and sparsely funny film, which some have described as "Ghost with a lawyer", rightfully wasn't especially noticed. A neat idea, good actors and good intentions were not enough to fill out any more dimensions than solid for this feature length directorial debut from James D. Parriott: it's an empty, thin achievement that fails to exploit the surreal premise to the fullest - only the finale, where the invisible ghost of lawyer Stone casually walks all over the house and reveals every hidding place of a gangster, does the thing bring up some kind of magic. Yet, most of the details in the film are not particulary well developed and seem forced, making Hoskins the only great thing in it.