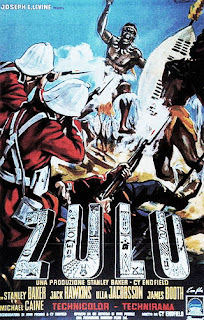 The British Army has established a base in Rorke's Drift, serving as its outpost for colonialism and irredentism into Southern Africa. On 22 January 1879, some 150 soldiers assembled into the 24th Regiment on Foot find themselves surrounded by a 4,000 men strong Zulu tribe that wants to attack and destroy their base. Even though greatly outnumbered, Lieutenants John Chard and Gonville Bromhead are determined to stop the attack. The Zulu tribe attacks them from both sides, some of their soldiers manage storm into the base and set the hospital on fire, but the Regiment manages to repel them and survive. The next day, the Zulus retreat.

One of the most popular British movies of the 60s, a real life  depiction of a British army Regiment resisting a siege of an army 20 times their size in 1879, "Zulu" still seems fresh and exciting even today, owing that to a good sense for suspense and action sequences, as well as authentic locations in South Africa, which are aesthetic and offer good shot compositions. Even though some of its themes are rather dated or seem questionable (especially by reversing the event to seem as if the Zulus are the enemy for resisting, and not the British colonialism and imperialism which tried to enslave the peoples of that area), "Zulu" is still a fine film and even established the then unknown actor Michael Caine as the new hope of British cinema. The first half drags, spending too much time on the life of the British army in the base, even though numerous characters are so flat they are barely distinguishable from each other, yet that is overturned an hour into the film when the Zulu siege starts, displayed through exciting images and anticipation of suspense: the camera pan of a thousand Zulu warriors standing at the top of a whole giant hill, overlooking the base, still sends shivers down the spine. Equally as great is the moment when the British soldiers are confronted with Zulu warriors shooting at them from the hills, almost as if they are standing right above them or the long line of hundreds of Zulu warriors stretching across the meadow, to a warrior in a close up. This siege last for the almost the whole second half of the film, and works splendidly. "Zulu" is basically a British 'African western', depicting a stand-off where the weaker ones manages to stop the enemy despite all odds, and despite a slow start, it manages to ignite and keep the viewers attention for the whole second act.