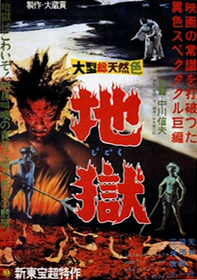 Shiro is a young student who is engaged to Yukiko, the daughter of his University professor, Mr. Yajima. One night, he was together with the classmate Tamura who drives a car and accidentally hits and kills a yakuza member on the street. Shiro is plagued by guilt, but Tamura tries to whitewash any wrongdoing from them. Shiro's life just goes downhill from there: while trying to report everything to the police, the taxi he was in has a crash from which Yukiko dies; Shiro returns to his home where his mother dies from a disease, while his father is cheating on her with a mistress; the yakuza's girlfriend, Yoko, tries to kill Shiro, but dies by falling from a bridge... Finally, all the inmates in the house die from poisoned fish and find themselves in hell. Shiro observes how all the people he knew had dark secrets one way or another, and how they are punished for these in hell. He is stuck trying to save his and Yukiko's unborn baby who is rotating on a giant wheel.

"Jigoku" is a dark and depressive fantasy-horror drama in which director Nobuo Nakagawa displays a grim perspective on life that is doomed to end in all kinds of tragedy and despair: for him, there is no escape from this "doomed if they do, doomed if they don't" cicyle, depicting how his characters are plagued while they were alive, only to be plagued once again in hell. However, it seems Nakagawa lost context from the film, almost as if he himself is unsure what this has to do with the overall theme of the storyline. The "normal", first part of the film, could have worked much better if it was changed just a little bit: the protagonist, Shiro, is plagued by guilt of a man who was killed in a car he was in, and the hell could have been just a symbolic representation of his bad conscience. If Shiro drove the car himself, this would have worked, but since the car driven by his friend, all of this guilt is not quite fitting. Unfortunately, Nakagawa somehow lost this simple perspective and included numerous other characters who also landed in hell, even those who had no fault, which seems uneven and pointless, unless it is a sardonic commentary on life that crudely punishes everyone, from those who are guilty to those who are innocent. The film drew attention thanks to its bizarre hell sequences which comprise the last 38 minutes, which stand out thanks to their outstanding special effects for that time (the "dune" valley with a river underneath it; demons sawing a man in half or taking the skin away from another man, leaving him only with a skeleton and organs underneath; the row of skeletons on a dark valley...). It is also interesting that the movie demolishes all the institutions in this segment by including all the characters in hell, from the police (an inspector who framed an innocent man), journalism (a false news article ruined the life of a man) up to medicine (a doctor erred with false diagnosis, but was too proud to admit his mistake). Still, all this could have been presented in a better way, since the ending is rather abrupt and pointless.