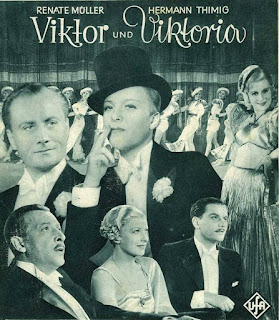 Viktor is a struggling actor, but cannot find a job because his dramatic interpretations are often comical. During an audition, he meets actress Susanne who also cannot find a job. Viktor informs her that he sometimes plays a woman, Viktoria, in a Cabaret, but since he has a flu, he persuaded Susanne to jump in to save the show. Susanne thus pretends she is a man playing a woman, and finds great success among the audience. An agent approaches Susanne and she signs a contract to continue performing. In London, she meets Robert, who falls in love with her, insisting that she is a woman, even though Susanne tries to pretend she is a man. Even more problems arrive when a woman, Ellinor, falls in love with Susanne, thinking she is Viktor, a man. Finally, Susanne and Robert kiss, while Viktor takes over the role of Viktoria as a comedy act.

Even though it was met with overwhelming enthusiasm by German film critics during its premiere, and subsequently gained the status of a classic in its country of origin, Reinhold Schunzel's transvestite comedy "Victor and Victoria" feels dated by today's standards due to its stiff narrative and dry-overlong musical sequences, some of which are even used in ordinary dialogues that rhyme. It is axiomatic that Edwards' film "Victor/Victoria", filmed 49 years later, is easily superior, displaying a rare situation where an American remake towers over an original. While the two main actors, Herman Thimig and Renate Muller, are very good, they are not convincing at playing the opposite gender, which is especially aggravating for Muller who is suppose to carry the film as a woman pretending to be a man playing a woman on stage, since her high, feminine voice leaves little ambiguity. Worse still is that all the rich potentials of the tantalizing premise were scarcely exploited, leaving many situations underused. Some of the best jokes still arise from the man-woman confusion  — for instance, Viktor releases four geese from a cage so that the two performers have to chase them and leave the male locker room, giving Susanne a chance to change clothes without anyone noticing that she is not a man. In another good scene, Robert jokingly informs Viktor that he is challenged to a pistol duel due to a bar fight, so Viktor shockingly leaves the room, only to accidentally stumble into some sound stage where a performer wearing Cowboy clothes is randomly practicing shooting. While good is exploring the men-women relationships and identities, "Victor and Victoria" still seems like a 'rump' version of these themes, too timid to truly give them justice, most noticeably in the abrupt ending, though it has charm.