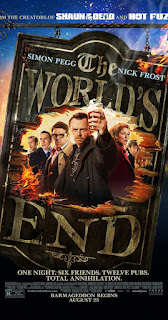 Gary King, an unemployed alcoholic in his 40s, rallies all his high school friends - Andy, Pete, Oliver, Steven - to travel from London back to their childhood town, Newton Haven, and have one final round of beers across all of the 12 pubs, including the last one they initially missed out, "The World's End". They also meet Gary ex-sweetheart, Sam. However, Gary and the gang soon find out all the inhabitants were replaced with blue-blooded humanoid robots and thus have to spend the night dodging them while running from pub to pub. Finally, at "The World's End", Gary and Andy find the secret underground hideout to the "Network", an alien intelligence that has been replacing people with robots in order to enlighten and advance the human civilization, so that it won't be the most backward in the entire galaxy. However, Andy and Gary refuse this offer and thus the "Network" abandons the plan and pulls out all of its technology with it that was shared with Earth. The Earth is thus left without technology, and people have to start all over again.

Edgar Wright's final film in his semi-trilogy of sorts, which included "Shaun of the Dead" and "Hot Fuzz", "The World's End" is a peculiar, daft achievement that starts out as your 'run-of-the-mill' nostalgia flick about middle aged friends trying to recapture the magic from their youth, only to make a dazzling turn some 38 minutes into the film in order to become an unpredictable science-fiction parody about alien invasion, an amalgamation of "The Stepford Wives" and "Invasion of the Body Snatchers". Leaving the rather overloaded (and unnecessary) 5-minute opening prologue with the protagonists as teenagers, "End" works rather smoothly, encapsulating small traits and features of the mentality of people in a small town, whereas the main actor Simon Pegg has a field day playing the leading character Gary King. Some of the best bits in the opening act arrive through comical dialogues between him and his reluctant friend Andy ("We are going back to Newton Haven!" - "Newton Haven is a black hole." - "That's because we are not there!") and such comical spirit that is not afraid to be wacky can be found even in the second half of the film: for instance, when one robot manages to assemble itself back again, putting legs instead of his arms, and attacks Sam, Gary shouts: "Get your feet off her!"

Some of this does work, though some does not, since some parts are not that much inspired, which leaves some scenes just ending up looking weird. Likewise, the ending is somehow strangely incomplete, among others because it abandoned Gary's story arc: what did he learn in the end? What did he achieve? What difference did it make? Basically none, and this seems slightly lacking. Still, Wright shows a sixth sense for pure comedy in a finale that is irresistibly hilarious and contagiously fun, with the likes of analytical humor not seen since the verbal duel between the astronaut and the bomb in "Dark Star" or Ray and Gozer in "Ghostbusters": when the two protagonists find out the hideout of the alien "Network", which explains that it is only trying to cultivate the human civilization, the most backward one in the galaxy, Andy starts objecting to its motivation ("Whoa whoa whoa! Who put you in charge? Who are you to criticize anyone? Now, you might think Gary is a bit of a cock and he is a bit of a cock, but he is my cock!") while Gary verbally outright insults it ("Intergalactic asshole!"; "Go back to Legoland!"), and they both defend the human right to be flawed ("We are more belligerent, stubborn and idiotic than you can imagine!").