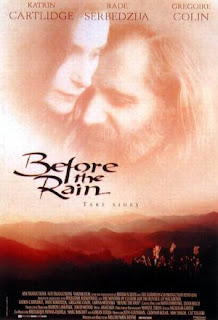 Three stories: Kiril is a young Orthodox monk who holds up his 2-year vow of silence in a Macedonian monastery. One night, he finds an Albanian girl, Zamira, hiding in his bed because a Macedonian militia is accusing her of murder and wants to kill her. Kiril helps her hide in the monastery. When older monks find this out, they expel him from the monastery. Kiril and Zamira flee and fall in love, but they are caught by her grandfather. When she wants to run away with Kiril, her brother shoots her... London. A Macedonian war photographer, Alexander, gives his mistress, Anne, an ultimatum. She is pregnant, but chooses to stay with her husband, so Alexander leaves. However, in a restaurant, a man from the Balkans causes a shooting spree and kills Anne's husband... Back in Macedonia after 16 years, Alexander meets his old love again, Albanian woman Hana. He saves her daughter, Zamira, from captivity of an angry mob, but they shoot him in revenge.

Milcho Manchevski scored it big time with his feature length debut film that was critically recognized and awarded with several prizes, and it is a matter of a quality, unassuming little film that reflects upon ethnic conflict and rule of violence in the Balkans, though it is not without its flaws since such a topic is sometimes presented in heavy handed, banal ways. Balkan primitivism was never truly cinematic, which is problematic even in "Before the Rain", yet Manchevski managed to still deliver a worthy and touching film about intellectuals and gentle souls trapped and hindered by a backward society, using a similar episodic three-part structure like "Pulp Fiction" that same year, where one story completes the other and it all adds up in the end. Out of three stories, the first one is great, yet the other two are melodramatic and too standard to truly rise to the occasion.

The first segment seems to draw its inspiration from wonderfully aesthetic landscapes of the Macedonian monastery on the Ohrid lake, which truly delivered a few great shots, yet the story is also intriguing as it symbolically speaks about the Macedonian "Romeo and Juliet" concept in which a Macedonian falls in love and protects an Albanian girl, who escapes from the extremists from the other nation only to fall victim to the extremists from her own nation. Gregoire Colin stands out the most in that segment as the good-hearted Kiril who follows a wow of silence, while a few comical moments all add up (in one scene, some kids are holding two sticks on the shells of two turtles, imagining they are fighting and calling them "Ninja Turtles"). The second and the third story seem like intruders, though, showing the Balkan mentality more the way the West wants to see it than the way it truly is, with several pretentious ideas (it seems "normal" for the Western viewers that a Balkan guy would suddenly start a shooting spree in a London restaurant just because he has an argument with a waiter, it seems) and explicit details (a man gunning down a cat on the roof; a close up of a sheep giving birth...) which reduce the subtle approach from the opening act. Rade Serbedzija is fantastic in the third story, though, charismatically portraying an intellectual who somehow managed to emerge from such a backward area, escape from it and still deciding to go back and change it towards better.