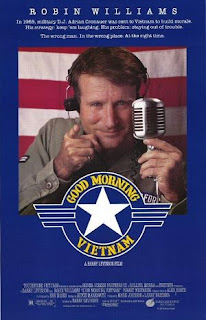 Saigon during the Vietnam War. Adrian Cronauer is brought from the US to work as a radio DJ for the American soldiers. Adrian's insane comedy broadcast is an instant radio hit for the listeners, but he makes fun of everyone, including Richard Nixon and the US military. Adrian also wants to start a relationship with a local girl, Trinh, and also becomes friends with her brother, Tuan. Private Eddie loves Adrian's show, but Lieutenant Hauk constantly argues with Adrian, who is free-spirited and refuses to follow his guidelines and constrictions. After a bomb kills people in a building, Hauk wants to censor the information - but Adrian reports it on the radio anyway, and is thus fired. After hundreds of letters, Adrian is brought back, but is shocked to find out Tuan planted the bomb because he considers every American an occupier. Adrian's relationship with Trinh leads nowhere due to their differences, and thus he leaves back for the US.

A rare comedy based on the Vietnam War, "Good Morning, Vietnam" marked the beginning of the "golden age" of Robin Williams' career which would last for a whole decade, and rightfully so since the comedian here is such a sensation that it is unbelievable: his casting was simply perfect since he brings a rarely matched energy, vitality and irresistible charm to the role of Adrian Cronauer (even though the majority of the storyline was fictional or amended for the film). Williams fits ideally as a radio DJ with a big mouth and non-stop jokes, and he acts almost like Jerry Lee Lewis: it doesn't matter if he destroys everything in sight as long as he entertains his audience. Already in the opening, when Adrian exits from the plane in Saigon and meets Private Eddie, does he prove a distinctive comic wavelength in their dialogue about the weather ("That is warm." - "Warm? No, this is the setting for London broil!").

The movie owes 90% of its appeal to his improvisational skills, and without Williams this wouldn't be half as fun, whether the jokes are politically incorrect ("The Mississippi broke through a protective dike today... what is... what is a protective dike? Is it a large woman standing by the river going: "Don't go near there!"), political (the fake interview featuring the voice of Richard Nixon) or just plain defying authoritarian figures (after a major argument with his superior, Seargent Dickerson, Adrian, before leaving the office, says this legendary reply: "You are in more dire need of a blow job than any other white man in history"). Unfortunately, the last third of the film lost inspiration and ended on a routine note: the sequence where Adrian talks to the soldiers who all want him to return as the radio DJ is not that funny, and neither is the lame baseball game featuring fruits instead of a ball at the end. Adrian's love interest with a local girl, Trinh, could have been handled better, as well: the only highlight is when he spots her in an English class and spontaneously jumps in as replacement to the teacher, in order to find out more about her. It is interesting that both "Vietnam" and another Williams film "Dead Poets Society" feature the same theme: an individual arriving to an authoritarian institution that turns against him for his free spirit and disobedience, only to leave heartbroken that nothing changed. Easily the best out of three collaborations between Williams and director Barry Levinson, "Vietnam" still seems fresh today, and although it is not as versatile or as focused as "M*A*S*H", it is still a sadly neglected (and rarely talked about) quality film.