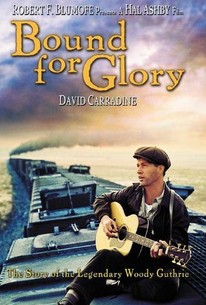 Texas during the Great Depression. Woody Guthrie does not know what to do with his life: he cannot find a job as a sign painter and thus feels ashamed that he cannot support his wife Mary and kids. Hearing rumors that there is no unemployment in California, he one day randomly starts his journey westwards by secretly sneaking with other stowaways  in train wagons. Finally in California, he witnesses how immigrants live in slums, only rarely getting poorly paid jobs in plantations. He also starts an affair with a rich woman, Pauline. Woody meets activist and singer Ozark, who tries to organize a strike and form a syndicate in order for the workers to get a decent pay. Ozark helps him find a job in a radio show, where Woody proves to be a gifted musician. Woody brings his wife and kids to California, but they argue and she leaves him due to his activism. When the radio forbids him to sing music about poverty and inequality, Woody resigns and leaves the state.

If there is a spiritual forerunner to Hal Ashby's biopic about Woody Gutherie, then it is Ford's great classic "The Grapes of Wrath", since both depict the grim events of the Great Depression in America and characters migrating westwards to California in order to find a job, thereby implicitly pleading for a better, fair system, for social equality. More so in "Bound for Glory", even: the hero is basically a socialist musician, but a one that became a socialist not by his own will, but simply by living in such hardship and poverty. Ashby once again manages to craft a quality, quiet film with an emotional understanding and sympathy for his characters (Woody cheated on his wife when he had a chance, yet it is difficult to completely shun him when a random girl says she "doesn't mind doing it" after hearing him play the guitar, upon which he says: "This town ain't dead yet!"), unobtrusively building the story, whereas it is interesting to spot the early use of steadicam in a couple of scenes, albeit scarce one (one is the camera following Woody through the slum, as dozens of people walks pass him as he approaches Randy Quaid's character), as well as a few impressive shots (the wide shot of a giant dust cloud approaching the Texas town, for instance, as Woody runs through the cloud to his home). Unfortunately, for a running time of over two and a half hours, "Bound for Glory" simply exhausts itself in far too much empty walk or repetitive scenes, especially if the viewers are not such fans of folk music (which is played by the protagonist abundantly). This is exacerbated by several episodic scenes which all add to the film's episodic tone (in Texas, one man randomly approaches Woody on the porch and says: "I don't know if you know it, but you are watching at an insane man!"). A decent 'social issue' film, yet a one that feels sadly standard, lifeless and conventional at times.