They Called Him Bulldozer 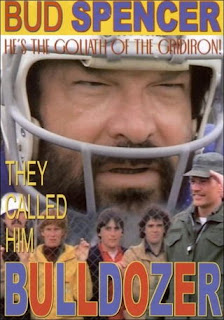 When a military submarine raises its periscope under it, it pierces the ship of sailor Bulldozer, who is thus forced to dock at a nearby coastal town. As he waits for his ship to be repaired, Bulldozer enters a bar and witnesses how American soldiers from a nearby military base, led by Sergant Kempfer, are using tricks and ploys to double-cross locals in card games and arm wrestling, stealing their money. Kempfer recognizes that Bulldozer is an ex-football player who woved never to play again since he was disappointed by foul play in sports. However, Bulldozer takes pity on the youngsters and becomes their trainer in an upcoming football play with the American soldiers. Even though the soldiers use brutality to beat the youngsters, Bulldozer steps in into the game and wins it for them.

Probably inspired by the huge success of "Rocky" and numerous Italian Association footbal clubs, Michele Lupo directed this sports comedy extravaganza with a few untypical dramatic moments for its main star, comedian Bud Spencer, and they would de facto remake the story four years later with "Bomber", just set in the boxing genre. "They Called Him Bulldozer" suffers from typical flaws of many Bud Spencer comedies from the 70s onwards: it starts off good, but half-way through the film crew suddenly seems to give up on any kind of effort and instead just settles for standard, routine empty walk and fist fights in the last hour. The same fate seems to have befallen this movie, though Spencer is again charming and funny as the unlikely hero, some jokes are good (the first fist-fight in the pub is amusing: as two soldiers charge with benches at him, Bulldozer just ducks between them and they hit each other whereas especially comical is the episode of a soldier so drunk that his cheeks are red — when he tries to attack Bulldozer, the latter just gives him a sip of drink, and the soldier suspends his swing half-way through before being knocked off by alcohol overkill) whereas Lupo manages to create a few unusual camera moves which work here and there (the horizontal alignment of the football players across the widescreen as the football flies over them in the sky). More could have been done out of the story, since the last hour lacks highlights, yet the movie is overall easily watchable and a light, albeit fun sports film.