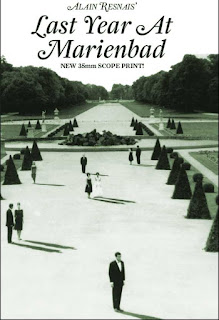 A play is being performed in a baroque hotel. After it, the guests mingle among each other. A man spots a woman and claims he recognizes who she is, insisting they met last year at the Marienbad garden. Her husband plays a game with sticks, Nim, with the man, and beats him each and every time. The man talks to the woman in the hotel, insisting they met and that she promised him to give her a year to make up her mind, though she denies it. Finally, from the stairs, the husband observes how the man and the woman walk away together from the building.

"Last Year at Marienbad" is one of those extreme French art-movies that go so far at being deliberately vague and obscure that they might as well constitute a film version of a Rorschach test, since the viewers have to decipher and assemble their own interpretation as to what they actually saw from the blank story. This is even more obscure than some of Godard's films. As such, it represents one of Alain Resnais' weaker films, yet it is not without at least some redeeming features, especially in the elegant camera drives across the corridors of the baroque hotel. Also, the hermetic story may still actually have a hidden meaning: the human fear of the passivity in the monolithic fate, the inability to free one's existence from the endless cycle of repeated variations of the same events.

This is illustrated in the 7-minute long sequence where the camera just endlessly drives through the corridors, while the narrator repeats the same sentences again and again ("...Silent rooms where one's footsteps are absorbed by carpets so thick, so heavy that no sound reaches one's ear..."); the Nim game in which the husband beats the man, again and again, not matter how much the latter tries to change the outcome; the man's narration ("It made no difference. It was always the same conversations, the same absent voices..."); the camera drive from the corridor towards the woman in the room, which is repeated six times — all to symbolize the endless cyclic nature of events. The main protagonist, the man, cannot change the opinion of the woman, no matter how much he tries, and thus remains an allegory of humans as a whole, who are just puppets in the crushing destiny of the Universe, the rigid order. The hidden leitmotiv is the everlasting nature of some things as opposed to futile actions of individuals who try to change the world. However, the movie is exhaustingly slow, with empty, stale dialogues, debilitated narration and dry, boring moments, which all undermine the movie's impression, adding to its divisive nature.