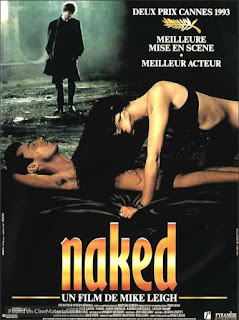 Johnny is a nihilistic misanthrope who steals a car and flees from Manchester after his street sex with a woman turns violent. He finds refuge in London, in the apartment of his ex-girlfriend, Louise. He seduces Sophie, Louise's flatmate, but ignores her after sex. Wondering the streets at night, Johnny meets a security guard, Brian, with whom he has philosophical conversations at night in the building he is watching over. Sophie encounters Sebastian, her landlord, who forces her into sex. When Louise finally returns to the apartment, she makes up with Johnny while Sebastian leaves the premises. However, despite his leg injury, Johnny suddenly stands up and leaves the apartment, aimlessly walking down the street.

Mike Leigh's breakthrough film, "Naked" is his most untypical achievement, depicting explicit sex scenes and sometimes even direct violence, abandoning his trademark subtle observations about social issues. This is not a film about a story. It is a film about a character, a highly bizarre, nihilistic young philosopher, Johnny (David Thewlis) who wonders the streets aimlessly and refuses to settle or "take roots" anywhere. Just like Robert Dupea in "Five Easy Pieces", Johnny is actually a highly intelligent person, but for some reason rejected his talent and society and only knows how to escape from a problem. He is also full of contradictions: on one hand, he is plagued by the problems and injustice in the world, yet on the other hand, he himself emits troubles and injustice towards others, especially towards the women with whom he has sex, only to later on run away from them. It is almost as if he is some sort of a teenage Friedrich Nietzsche whose wild, juvenile nature was left untamed despite his education.

The script is filled with a wealth of fantastic, philosophical quotes which are a joy to listen and form highlights in this 'slice-of-life' storyline by speaking volumes about some truths in life ("That's the trouble with everybody: you're all so bored. You've had nature explained to you and you're bored with it, you've had the living body explained to you and you're bored with it, you've had the Universe explained to you and you're bored with it. So now you want cheap thrills and like plenty of them."; "No matter how many books you read, there is always something in this world that you never ever ever ever understand."; when Louise asks him "How did you get here?" when she finds him in the apartment, he cynically replies with: "Well, basically, there was this little dot, right? And the dot went bang and the bang expanded. Energy formed into matter, matter cooled, matter lived, the amoeba to fish, to fish to fowl, to fowl to frog, to frog to mammal, the mammal to monkey, to monkey to man, amo amas amat."; "Have you ever thought, right, but you don't know, but you may have already lived the happiest day in your whole life and all you have left to look forward to is sickness and purgatory?"). The excellent Katrin Cartlidge stands out the most in the cast with her performance as the 'daft' Sophie, finely balancing both her fragile and confused nature. The only flaws are the subplot revolving around the supporting character of sexual predator Sebastian, who is unnecessary in the story, whereas the last quarter of the film is rather pointless, which somewhat reduces the quality as a whole.