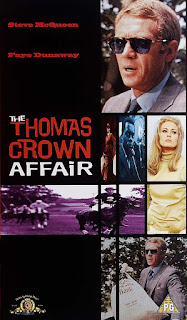 Millionaire Thomas Crown, owner of a respected company, secretly hires the coiled Erwin and four other associates for an assignment of which they will find out only later on. One day, he gives them the instruction to rob a bank: the four men steal the bags with the money in the building and place them in Erwin's car. He, in turn, leaves the bags in a trash can in a graveyard. There, Thomas picks up the money, a sum total of 2.6 million $. The police and Inspector Malone cannot find any clues to the perpetrator, until investigator Vicky Anderson is brought to the case. She finds out that Thomas recently opened a Swiss bank account and assumes he is the mastermind behind it all. Vicky seduces Thomas, but then falls in love with him. When the police set up a trap, Thomas escapes, leaving Vicky behind.

An interesting and proportionally stylish crime film, "The Thomas Crown Affair" is a smart, slick and appropriately unusual achievement of its genre that attempted to become timeless, yet in the end still remained "trapped" in the 60s. The occasional impression of a dated and/or overstretched feeling of the film is still only a marginal complaint compared to a wealth of virtues, from an innovative use of the split-screen technique all up to the excellent performance by Steve McQueen and Faye Dunaway who ignite a certain 'chemistry' when interacting, which is especially palpable in the inspired chess sequence in which she is seducing him only through her looks. Norman Jewison directs the story with elegance, though it still lacks humor, and needed more charm and emotions, delivering a good film which is at the same time a little essay about the investigative detective profession, just a step away from a real manual for detectives.