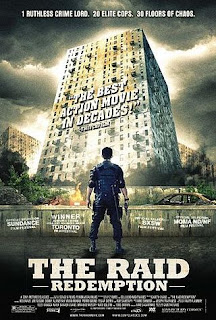 Police officer Rama, a martial arts expert, is one of the 20 SWAT team officers who are sent to raid an apartment building, since a criminal, Tama, has his headquarters on the top floor. The police manage to reach the 6th floor, but are then ambushed by Tama's gangsters, who kill everyone except for four people: Rama, Bowo, Dagu and Lieutenant Wahyu, who tells them that no reinforcements will be coming to help them, since he started the mission on his own and knows that Tama corrupted the police to the highest ranks. Among the tenants who help and hide them in an apartment is Rama's brother, criminal Andi. Wahyu manages to reach the top floor, arrest Tama, but then kills Dagu. He also kills Tama, and is then arrested by Rama and Bowo, who walk away from the place.

"The Raid" managed to help put Indonesian cinema on the map, showing an audacious energy that already helped other Asian countries reach the world stage, such as the Korean cinema in the 90s or Hong Kong's cinema in the 80s - though it is peculiar to mention one footnote, namely that the story was not conjured up by an Indonesian author, but by a British one, director Gareth Evans. The film starts in medias res, not taking up time to build up the protagonists, but to immediately place the characters into action, sending the SWAT team quickly to raid the apartment building floor by floor - while this helps grab the viewers attention from the start, it later on proves somewhat detrimental, since the lack of character development sometimes causes confusion as to whom is actually fighting whom, and thus restricts the viewers from emotionally engaging into the story. Still, Evans' fascination with Pencak Silat pays off, since "The Raid" is filled with nonstop suspense and manages to keep up that level throughout the entire film, with some sequences standing out due to virtuoso choreographed martial arts fights (the bomb in the refrigerator; jumping through a hole on the ceiling to escape from gangsters on the upper floor; the anthological sequence where Mad Dog fights with both Andi and Rama even though he has a sharp object stuck in his neck...), though it is not for everyone's taste since a fair share of them are hard core and brutal (villain Tama, for instances, is introduced shooting captured people in the head one by one, and when he is out of bullets, he takes the last man out with a hammer). "The Raid" is an interesting 'raw', basic action film done with enough spirit and energy to please genre fans, though it is still not in the same league as Asia's action classics such as J. Woo's "Hard Boiled" or J. Chan's "Project A".