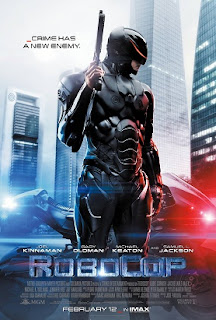 In the future, OmniCorp corporation managed to turn massive profit by deploying ostrich-turtle like robots, ED-209, in the Middle East and other war zones. However, they are still denied access to deploy robots in the US itself, so its CEO Sellars orders Dr. Norton to create a blend of human and robot, a cyborg which will sway the public that machines could have emotions as well. The right candidates becomes cop Murphy, who was lethally injured by a car bomb, but given a robotic body as RoboCop. He manages to reduce crime in Detroit, but this also leads him to corrupt people at the top, all the way to Sellars. In a showdown, RoboCop shoots Sellars.

The remake of the critically acclaimed original from '87 should already be congratulated by the sheer fact that it doesn't suck. Still, predictably, "RoboCop" is weaker than the first film, and loses inspiration in the second half when it turns rather routine. The opening act gives a surprisingly interesting new take on the concept by showing an unfathomable broadcast of American soldiers deploying the giant ostrich-turtle like robots ED-209 in Tehran to search for insurgents from house to house, giving a subversive take how the military is using robots to avoid human casualties in wars, giving new takes of critique of corporate greed to the franchise, whereas Michael Keaton is great as the ruthless CEO of OmniCorp, as well as Samuel L. Jackson as the media host Novak. This new edition took also a rather unorthodox approach by reducing the violence and grotesque humor, since it is as violent as "RoboCop 3" - that way it became more measured and restrained, yet at the same time without bite and sharpness of the 1st film, the only exception being the graphic, disturbing sequence of Murphy observing what is left of his body after his mechanical suit is removed from his head. A big error was to suddenly, for no reason replace RoboCop's iconic suit in the first third with a new, black suit which looks fake and reminds too much of Batman's costume. Also, the second half seems rather standard and lacks highlights, with a somewhat predictable, anticlimactic ending, proving that there is something more needed than just a regular storyline.