Hitler from Our Village 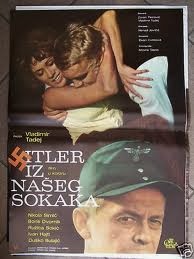 Vojvodina, a few days before the outbreak of World War II. In a small village, people from various ethnicities live together. After the Axis invasion of Yugoslavia, the Volksdeutsche, local, native Germans, become collaborators with the invading German soldiers. Among them is German Leksi, a drunk who suddenly becomes a Nazi patrolman. The position rises to his head and his ego cannot resist but to show off and belittle the locals, since the punishment is 25 dead locals for every killed German. Leksi's neighbor Marko is secretly seducing his wife Anika. In order to save himself from going to the East front, Leksi agrees with Marko to get shot in the leg and go the hospital. Marko doublecrosses Leksi and refuses to pay him. In anger, Leksi shoots Anika, and Marko Leksi. 25 locals are rounded up and executed as punishment.

Some films are rightfully forgotten with time, yet resurface here and there due to their sheer weird concept or strange title that seizes the attention. Among them is the solid, but standard humorous partisan film "Hitler from Our Village", a lifeless and mechanical 'museum example' of a movie, though it has such a cynical title that it managed to "survive" enough to get screened here and there. The sole concept is very good: it tackles the rarely shown perspective from the Volksdeutsche (native German minority of a country, here Yugoslavia) during the Axis occupation, and one of them, Leksi (very good Nikola Simic), sees this as an opportunity to rize though the ranks and turn from a nobody to a local bully. Except for three or four comical moments (in one of them, Leksi spots farmer Toma holding his hand up in the air in front of two other farmers and sees this as a sign to make the Hitler salute. However, after he does that, Toma says to his friends: "My dog was so happy to see me that he jumped this high"; Leksi urinating while looking at a wanted poster), the remainder of the film is overlong and did not exploit all the rich potentials of the starting idea, with too much empty walk and a whimsical end that does not seem like a harmonious conclusion to the whole.