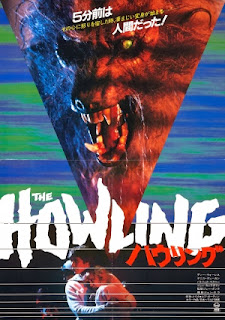 TV news anchor Karen White plays a decoy for the police in order to lure and capture a serial killer. When he tries to rape her, the police intervene and kill him. Karen is unharmed, but plagued by nightmares, which causes her husband Bill to bring her to a psychiatrist, Waggner, who advises them to spend some time in a small, desolate settlement near the forest. However, Karen discovers that the inhabitants there are werewolves. When even Bill gets bitten and transforms into one, Karen and an acquittance, Chris, use silver bullets to fight the werewolves. While reading news on TV, Karen herself transforms into a werewolf and is shot and killed in the studio.

Werewolf horrors are a dime a dozen. "The Howling" is congruent to Joe Dante's dark-scary taste, and even though the heroine Karen, played by Dee Wallace, is rather bland, the sole execution of the already hundred times used genre is surprisingly impressive, maybe because, among others, the screenwriter was director John Sayles. The locations around the dark forest full of fog, inhabited by the beasts, are especially spooky and moody, and even a few shrill characters elevate the impression as a whole, like a doctor who on one side of the table holds a sandwich and on the other an organ that he dissects. The scene where the heroine transforms into a werewolf, live on TV, in front of the cameras, is remarkably original in the genre where the media presence was ignored. Despite the above mentioned plus points, "The Howling" nonetheless lacks more wit and spirit, since its humorless tone and often standard storytelling of the theme do not leave more room for a better grade, and it is difficult not to notice that Landis' "An American Werewolf in London" already gave a superior example of how that genre is done down to a T.