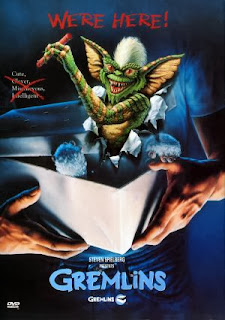 Freelance inventor Peltzer buys a strange, but cute furry creature, a Gremlin, from a Chinese store for his son Billy for Christmas. However, that same night, Billy fails to follow the rules: the Gremlin comes in contact with water, producing disgusting off-spring, and they in turn eat after midnight, transforming into hideous little monsters. Billy and a girl, Kate, thus try to battle with thousands of Gremlins spreading throughout their town. They manage to eliminate them by trapping them inside a cinema and setting it in an explosion through gas.

Joe Dante's most commercial film, black horror comedy "Gremlins" demonstrates that not every cult film from the 80s holds up well today. A bizarre mess, "Gremlins" start out as a satire on Christmas gifts and the tendency of decadent people holding exotic animals as pets, only to degenerate into a buffoonish plague of the little monsters - watching them break stuff the entire film is too little to hold the thin story, whereas the human characters act too much like extras, except for Billy's dad, a clumsy amateur inventor, or the grumpy neighbor, Murray. You do not know what is more misguided here: to have scenes of mom killing Gremlins by making them explode in the oven or setting the whole film on Christmas. Maybe the concept is an allegory of the Eastern philosophy or values (Gizmo was obtained from a Chinese salesman) getting distorted in the Western world, or an allegory of consumerism gone wild, but either way, that was not incorporated into a quality relation with the rest of the events. One of the few truly expressionistic moments with a point is the sequence of thousands of Gremlins cheering while watching "Snow White and the Seven Dwarfs" on the big screens, in a peculiar sight of both cute and disgusting interacting together. Almost like 'Muppets on acid', the film has a few moments of inspiration (Billy trying to grab a Gremlin before he jumps into a pool of water, thereby creating an explosion of proliferation), but overall, watching "Gremlins" is about as fun as watching a dozen cockroaches roam through a kitchen.