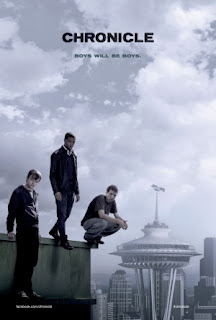 Seattle. Teenager Andrew buys a new camera and uses it to record everything around him. His mother is sick and his father sometimes beats him. He is also bullied in school. One night, his friends Steve and Matt invite him to see a strange hole in the woods, which leads to a cave with strange crystals. After returning to the surface, they find out they have grown telekinetic powers. At first, they use it to make pranks, like making a teddy bear float in a store or to move a parked car. They are even able to fly. During a storm, Steve tries to calm Andrew, but the latter looses his control. A lightning bolt kills Steve. Andrew considers himself superior due to his powers, and kills four bullies to take their money away. When he lands in a hospital, his father blames him for the mother's death, which causes Andrew to start flying and wrecking havoc in the city. In order to stop him, Matt kills him.

"Chronicle" is almost like a hidden good Superman vs. fascist Superman story, an upside down retelling of the superhero Hollywood matrix, showing the bad guy as the main protagonist and how he became that way, caused by bullies and isolation in the society. However, the slightly overused "found footage" genre is a burden to the film since the storyline takes too many overconstructed means and shortcuts to tell the story only from the POV of home (or surveillance) cameras. Like, how many times have you seen a guy talking private stuff like "I think my mom is cheating on my dad" while someone is recording him? Or a teenager not stopping his camera while he is arguing with someone? Sometimes it is simply necessary to tell the story from the director's, "all-knowing" camera. The first half is slightly problematic, too, because it wastes too much time on the buffoonery of three teenagers, though it has a few moments (Andrew making the silhouette of the holly Mary in his soup to fool the waitress; the camera recording itself in the mirror while floating in the air; Andrew and Steve performing "magic tricks" in front of the puzzled audience). The second half takes a more welcomed philosophical approach, and the emergence of the old "power corrupts and absolute power corrupts absolutely" theme. The story could have went in thousands of directions, yet this one is also a good version, with the action finale reaching almost the level of "Superman II".