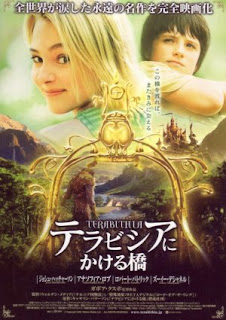 Jesse lives in a financially struggling family, feels like an outsider to his two older sisters and thinks that his dad favor his little sister May Belle. In school, he is bullied, but the new transfer student, Leslie, finds his drawings appealing. Leslie proves to be a very unique girl and brings Jesse across a river into a forest, where they imagine their own kingdom, Terabithia. Leslie plays a prank on the bullying girl Janice, but she finds out that she is aggressive only because her father beats her, they become friends, too. Unfortunately, Leslie dies while swinging on a rope that broke and falling into a creek. Jesse is devastated, but decides to continue imagining the Terabithia.

One of the most touching kids fantasy movies, a one that entirely avoids the corny cliches of that genre, the second movie adaptation of "The Bridge to Terabithia" is a far better version than the first one from '85 and a completely different movie than you might expect from the misleading trailers. Unlike similar "a dime a dozen" post-"Lord of the Rings" fantasy novel adaptations, like the standard "Spiderwick Chronicles" or "Prince Caspian", this movie does not send the message that all you need to do is have a good fight and everything will be all right, because the story does not even contain action or a conflict between good and evil. Refreshingly, only 10 % of the story is a fantasy, while 90 % is a subtle study of two outsiders in school who become friends, played wonderfully by Josh Hutcherson and especially the amazing AnnaSophia Robb, whose charm is simply irresistible. The mood is fabulously realistic, transporting the feeling of high school life to the viewers with ease, the chemistry between Jesse and Leslie is felt the minute he imagines "bubbles" around her while she is reading out her essay about scuba diving, the cinematography by the legendary Michael Chapman (in his last film) is crystal clear, the build up of the story is completely untypical whereas the blend of drama and fantasy works despite a few strange decisions (in one scene, the face of Janice is seen on a giant troll, though even that can be seen as symbolic since she transforms from a foe to a friend) since Terabithia is just an extension of Jesse's and Leslie's wish for escapism from the 'rough' world, reminiscent of Miyazaki's "My Neighbor Totoro". The ending is one of the saddest of the decade. A rare example where a slice-of-life drama outranks special effects, a big surprise and a movie that is truly one of a kind.