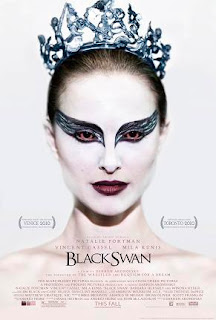 Nina is one of the many ballet dancers eager to get the main role in Tchaikovsky's "Swan Lake". The director, Thomas, thinks she is great for the role of the white swan, but too timid to really pull off the role of the evil black swan. However, Nina gets the double role eventually and starts practicing for the premiere. Strange things start happening to her: she wakes up to find scars on her skin; she has hallucinations and agrees to take drugs with dancer Lily in order to "prepare" for her dark side as the black swan. At the premiere, she has a hallucination of killing Lily, but wakes up to realize she just injured herself with glass. She does a great performance and dies as well on stage as in real life, fulfilling a (too) convincing performance.

"Black Swan" is one of many modern movies whose critical acclaim and numerous awards are not proportional to its actual quality - it is an artistic placebo. It is a mess of a movie whose insane events and surreal ideas only get explained and justified in the conclusive ending, a sly, satirical jab at not knowing where to stop in "method acting", but in order to get to those last five minutes in the finale, you have to endure almost a 100 minutes of preposterous moments. Unfortunately, director Darren Aronofsky too often resorts to cheap attempts at sustaining the viewers' attention - cue shock music to Nina suddenly turning around to see Beth behind her; cue shock music to Nina suddenly taking a step back and stumbling into a nurse behind her; cue shock music to Nina masturbating in bed only to suddenly turn around and realize her mother is in the room... - mostly because the sole storyline has little to show, anyway, while the abstract-symbolical motives sometimes turn into camp, like in the much hyped lesbian sequence that is throw away material without any use in the movie. In Darononfsky's defense, he made a few good back-up constructions that parallels the sole Swan Lake story (for instance, Nina starts experimenting with her "dark side" in order to play the black swan; her rivalry with Lily over the leading role which mirrors the rivalry between Odette and Odile...), yet they are of limited compensation for the rest of the movie. Some argued that the reoccurring scenes where Nina sees blood on her finger is an allegory for her masturbation and loss of virginity, but even if it is, could it have been more cheaper than this? 13 years ago, Kon directed "Perfect Blue" that had a similar story, and even though it was not one of his best films, it is still far more coherent than "Black Swan".