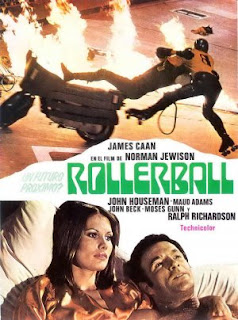 In the future, the corporations dictate everything in society, but reward with a lot of commodity. A sport, Rollerball, in which two teams of players fight in an arena to throw a metal ball into a goal, is the most popular form of entertainment, and one player, Jonathan, rises to heights. However, because the corporations want to promote the game as an "example of futility of individuality", executive Bartholomew orders Jonathan to retire. He refuses, so executives use a ploy - abrogation of rules and ever more increase of violence - to scare him into quiting. However, in the final game, even though several of his players get killed, Jonathan wins and refuses to stop, thus achieving freedom of choice.

"People chose commodity over freedom." - "Commodity is freedom". - "No, it's not." This is one of finest dialogues ever heard on film and serves as a guide to the abstract cult science-fiction drama "Rollerball", a very unusual and challenging movie that borrows elements from Huxley's "A Brave New World" and Zamyatin's "We", but setting them in the world of sports. "Rollerball" isn't a movie about a sport as much as it is a movie about suppressed individuality. Director Norman Jewison crafts a morality play, but does it very subtly, never explicitly sending the message, sometimes even posing the questions subconsciously - for instance, the sequence where bored party guests take a gun, shoot and put six old trees on fire "for fun", actually says a lot about decadence and the sneaky, subtle changes in the balance of the human spirit caused by glorification of violence - while the setting of the film, though not articulated enough because more details should have been shown (like the library scene, where Jonathan is informed that there are no more books, because they are all "summarized in a computer"), is clever and satirical, by showing the world of the future as a corporate state that uses the old Latin saying "Bread and games", where the title sport is used as a form of distraction so that the masses will not question the established order. Some sequences may be slightly clumsy, the storyline may not sweep the viewers as much as it could have, yet the main theme is strong: Jonathan knows that executives took away his girlfriend, and now demand that he retires, but by defying them and still playing on, he achieves his own personal freedom of choice. Today, one could wonder why some critics were "shocked" at the violence back in 1975, because the three sequences of the game in the arena seem tame and stylized, except for maybe the last one, where it degenerated into pure fight, and despite some uneven moments, some critics point out that "Rollerball" today seems equally as relevant.