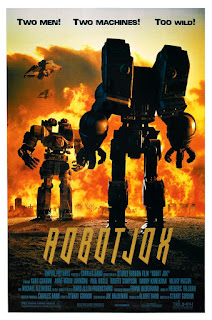 50 years after a nuclear overkill, war has been banned and the two opposing forces - the US and the Soviet Union - conquer territories exclusively through tournaments in which a giant, 70 foot tall robot fights on each side. The Soviet pilot Alexander manages to win every fight, but the one involving American Achilles ends in a draw. The robot match is suppose to repeat in a week, but Achilles refuses to fight anymore because his robot accidentally fell on the audience and killed people. Achilles' jock Tex also turns out to be a spy. When a woman, Athens, is injured piloting his robot to fight Alexander's, Achilles replaces her. The two robots destroy each other, but Achilles and Alexander decide to stop fighting.

Long before "Real Steel" and "Pacific Rim", and almost simultaneous with the 'mecha' genre developing in the Japanese animation, Stuard Gordon directed this cult robot fighting extravaganza with far less blood than his feature length debut, "Re-Animator". "Robot Jox" is a 'guilty pleasure', a surprisingly solid B-movie that embraces the viewers' fascination with giant robots, but is overall rather stale - it consists solely out of two robot fight sequences, one at the beginning and one at the end, while the rest is your standard, monotone training of the pilots, entirely eclipsed by the action of the mechanical creatures, lifted only occasionally thanks to three or four good jokes (after doctors ask him to donate his sperm for a good breed, Achilles flat out says: "How about I make a direct deposit?"; "If they are our future, I'm glad to be history."). The movie has a certain 80s flair, and thus an opulent charm, even in the stop-motion effects of the robots, yet isn't half as fun as one might think, remaining too much in the grey territory of banal dialogues, banal (human) events and the dated US-Soviet rivalry, except for a refreshingly untypical ending. It's a wrestler movie without pathos, an action movie with too much dull moments and too little satire, however, the concept is not to be that easily dismissed: if you are looking for a better equivalent, in "Shin Seiki Evangelion", for instance, Anno showed that a giant robot fight can be stylized so much that it becomes true art.