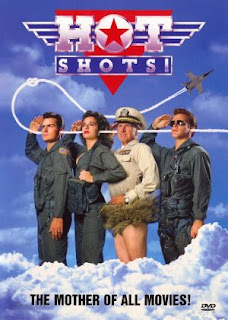 Several years ago, US Navy pilot "Mailman" crashed and died, while everyone placed the blame on his co-pilot Leland Harley. Even today, that incident is plaguing Harley's son Topper, also a pilot, who gets help from psychiatrist Ramada. Topper falls in love with her, leading to a clash with Gregory, his rival fighter pilot. However, all of them are called in to an aircraft carrier led by Admiral Benson for a top secret mission: the US war planes are suppose to fly to Iraq and throw bombs that will destroy Saddam Hussein's nuclear power plant. Despite his inner struggles, Topper succeeds, returns safely and ends up with Ramada.

"Hot Shots" is one of those popular movies that seem slightly dated today, because despite an overall good fun, its cartoonish jokes that are often banal and lame announced the eventual self-destruction of the parody genre a decade later. There is almost no empty scene, every moment is filled with a joke, yet, as said, a large share of them do not seem fresh today - a good example is the little dog joke that simply isn't funny, but is repeated nonetheless again and again, to death. Director Jim Abrahams still manages to sustain a sure director's hand in such a chaotic/anything goes environment - and even improve it in the far better sequel, "Hot Shots: Part Deux" - yet one can sense that the strength of a point was not constructed at the same level as his comedy classics "Airplane" and, especially, the phenomenal "Top Secret". The actors are all in top-notch shape, though, especially Lloyd Bridges in the brilliantly silly supporting role as the ever clumsy Admiral Benson, which advanced into a small comic gem. The most interesting ingredient in the storyline is the analogy of Operation Opera in the final third, delivered directly but refreshingly relaxed, while the popularity of the movie was boosted by the Gulf War that ensued that same year. All in all, a wacky, crazy, but good parody with a few hilarious jokes (the transfusion scene).