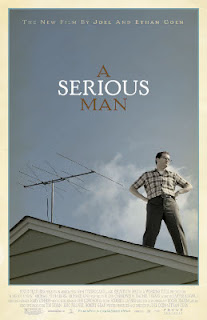 A Polish-Jewish village, early 20th century. A man returns home one winter and brings Groshkover, an old man who helped him in the snow. But the man's wife is persuaded that Groshkover died three years ago and stabs him. Groshkover stands up and leaves... Minnesota, '67. Larry is a physics teacher of Jewish heritage, married and has two kids. But lately it seems as if all the troubles in the world have decided to plague him: Larry's wife announces that she wants a divorce and him to move out so that her new lover Sy can live in their home; he is pressured to take a bribe in exchange of changing a student's grade; his brother Arthur still lives in their house... Larry turns to three Rabbis to find the cause of his misfortune, but finds out nothing.

After their excellent "No Country for Old Men" returned them back to shape, the Coen brothers returned back to their stagnation phase with two uneven movies, black comedy "Burn After Reading" and drama "A Serious Man". The latter seems to be a rare intimate, personal film of the Coens, exploring such themes as religion, emotions and spirituality - but the problem is that the Coens were never emotional or spiritual in their films in the first place, which gives "A Serious Man" a strange bipolarity. One could argue that they were hiding that side until now, but even in this story, they are rather cold and detached than intimate and warm. Unfortunately, there is not much in the story, either: the opening prologue set in a Jewish-Polish village in the early 20th century is pointless, numerous characters (Arthur) are pointless, the three dreams the hero experiences are pointless, yet the Coens still manage to score a few plus points thanks to the cynical message that bad things happen to good people without a reason, and that religion does not have any answer to it (in the darkly ironic end, they even show that a bad thing happens to the hero with a reason - for once). The Rabbi's story about the dentist is probably even deliberately pointless in order to show that for some events there is no deeper meaning, no matter how we try. Yet, movies should have one, though. It almost seems as if they tried to imitate W. Allen. It is another Coen brothers film without their Coen touch, yet it has a truly genius comic moment when Larry is in his office and laments to his colleague because bad things are happening to him despite his good nature ("I don't know what I am doing wrong...Maybe because I saw 'Swedish Reverie' once..." - "No, it's OK, we don't need to know...!" - "...It wasn't even erotic!").