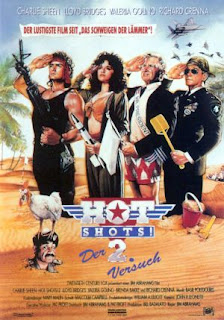 Once a warrior, now a peaceful Buddhist somewhere in Asia, Topper Harley is brought back to action when US president Benson orders a secret mission that is suppose to rescue a rescue party that went to rescue a rescue party in Iraq from captivity of Saddam Hussein. Topper once again teams up with his former girlfriend Ramada and goes with a small boat to the jungle in Iraq. After a lot of troubles, he rescues Colonel Walters and Ramada's husband Dexter, while Benson fights with Hussein in his castle. In the end, the team escapes with a helicopter and throws a piano on Hussein.

After a huge commercial success with "Hot Shots", director Jim Abrahams made the 1993 sequel "Hot Shots! Part Deux" that's even better and funnier than than the occasionally arbitrarily original, crafting a worthy part 2 that became the last great parody film, long before that genre completely collapsed with disastrous "Scary Movies" and "Meet the Spartans". Part 2 is silly and "rough" at moments, but from start to finish it's a super fast, super fun parody with class, where the authors wonderfully spoofed "Rambo" and 'Operation Eagle Claw'. Some of the jokes are completely random and come so swiftly that it's hard not to like them, while Abrahams even succeeds with childish gags: for instance, the scene where Topper (Charlie Sheen) fails repeatedly to hit an Iraqi soldier who spots him, and thus takes a chicken, puts it on his bow and uses it as an arrow, sending it flying right into the soldier, is so absurd and out of this world that it's howlingly funny. Except for a crude sex-sequence parody, all others gags works and have their purpose, from wacky lines ("It seems the upper hand is on the wrong foot, Saddam!") up to hilarious small situations (Topper doesn't have time to recharge his machine-gun and thus takes a hand full of bullets and throws them at Iraqi soldiers, "eliminating" them; an Iraqi soldier with a 'bulls eye' sign on his back). Sheen is really in great shape, but a small jewel is Jerry Haleva's performance as Saddam Hussein, who drinks camel milk, has a pale spot on his chest from a bra and becomes incredibly clumsy at every move. It's a hilarious light film, and it's a pity they never made "Hot Shots III", since it would have had so much potential after the War in Iraq.