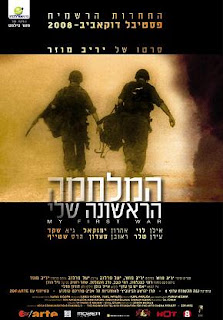 When the 2006 Israel-Lebanon war broke out, the young Yariv Mozer was called in as a reservist for the IDF army – and took his video camera with him. During the four weeks of the war, he documented how his unit was settled around Kiryat Shmona, a town on Israel's north, to prepare for a possible ground offensive. He documented numerous katyusha rockets that fell in the town, their commander who called his nephew, a singer, to entertain the troops, TV reports and interviews of the soldiers who told about the messy nature of the whole situation. In the end, the commander decided not to send the troops into Lebanon. After the war, Mozer also interviewed soldiers, some who suffer from post-war trauma, some who write their experiences in memoirs and some who quit their job.

„My First War“ is an honest and spontaneous „accidental“ documentary since it's author, the young Yariv Mozer, took his video camera when he was drafted in the army during the 2006 Israel-Lebanon war – the result is a rough, but interesting essay about the war and it's consequences. Even though his unit never went into a direct battlefield, Mozer was able to pick up just enough footage to incorporate it into a modest movie, whereas the best moments are small scenes showing what happened during that time in Kiryat Shmona (empty streets, a car in the parking lot heavily damaged by a katyusha rocket, a bedroom with a crater on the ceiling caused by a direct rocket hit). In that aspect, it's a pity he didn't manage to show more – frankly, some 40 minutes into the film, the war is already over and it seems he slightly „cheats“ the audience by filling the remaining 40 minutes of the movie with arbitrarily interviews of (ex)-soldiers who participated in the war and still feel the frustration of the sloppy execution of the conflict, though even that can be justified as part of the overall theme of it's consequences. Some tighter crafting would have been better, yet that's difficult in the documentary genre where you're up to "destiny" as to what will happen in front of camera, and providing the human perspective of the war is something that goes hand in hand with the story, especially with a few angry comments from IDF officials (one of them complains how a unit was first sent to go to spot A, then to spot B, then they were told to go into Lebanon, and then they were ordered to return to spot A, because "it's as if nobody is sure what we want"), some of which are so intimate it's a marvel how the author was allowed to film them.