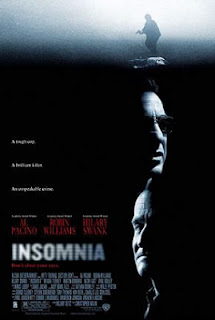 Nightmute, Alaska. A murdered body is found so police officer Dormer is sent from Los Angeles for backup, even though he is under investigation for planting evidence. When the police surround a cottage, they are attacked by an unknown person. In the chaos that breaks loose, Dormer accidentally shoots his colleagues Eckhart in the fog, but decides to put the blame on the unknown perpetrator. With time, Dormer discovers that crime novel author Finch is behind the murder, but cannot do anything because he knows the truth about Eckhart. Together, they decide to plant the blame on the acquittance of the first corpse. When Finch captures police officer Ellie, Dormer kills him, but succumbs to wounds himself.

After his Batman films gained world attention, numerous critics started to search for Christopher Nolan's early films, among which is this one where the director surprised a lot when he crafted one of the few remakes that are actually better than the original: thriller "Insomnia" leads the story better and more even than the good, but slightly unexciting Norwegian film of the same title from '97., keeping its sharpness up until the last take. The opening act is rather shaky and at first deceives that the whole film might just be an ordinary crime flick, but with time it turns into its opposite. Police officer Dormer (again excellent Al Pacino) is an untypical protagonist who makes the story unusual when he decides to cooperate with murderer Finch who knows his dirty secret, by which the nature of corruption is skilfully displayed. Two excellent sequences stand out: in one, Dormer interrogates arrogant teenager Randy who smokes and swears, but then the police officer loses his patience, turns the kid's table towards himself, throws his cigarette and says him that his whole 'screw-the-world' attitude maybe works on others, but not on him. The second one is when he meets killer Finch, who cut of the fingernails of the corpse after the crime, and tells him he is as "mysterious" with that idea as a toilet bowl. The sole setting on the utmost north of Alaska, rarely used as a location in cinema, is exquisite and gives the whole story an eerie feeling, as if it is not from this world, whereas it was also one of only two or three notable movies in the later half of comedian Robin Williams' career, here deliciously cast against type in the untypical role of the unpredictable bad guy.