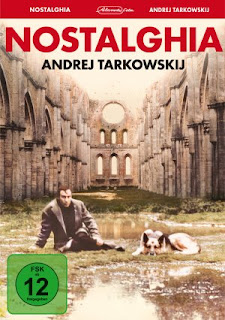 Russian writer Andrei is in Italy in order to write an autobiography of the deceased Russian emigre Sosnovsky. Andrei and Eugenia, his interpretor, visit a church. He feels depressed and isolated, until a madman, Domenico, catches his attention. Domenico and his family spent seven years hidding in their home, waiting for the end of the society, and his idea that the world can be saved by transporting a lit candle across a poll captivates Andrei. Domenico commits suicide by setting himself on fire, while Andrei dies after carrying the lit candle across the empty pool.

Winner of the best director award at the Cannes film festival, Andrei Tarkovsky's sixth film, "Nostalgia", is thematically a blend between his previous - nostalgia and memory of his childhood in "The Mirror" - and last film - the possibility of the end of the society (world) in "Sacrifice" - yet it is overall just a pure art film, a hermetic cocoon with little universal elements people can identify with - and without an 'outburst' of author's creative unpredictability as it was the case with Pasolini, Fellini, Ashby or Hitchcock. As with most of his achievements, the viewers will search for a story, yet Tarkovsky's "Nostalgia" is more aligned towards creating a mood, turning into those 'advanced viewings' that demand a lot, yet the payback is not proportional since - despite a masterful shot composition - the movie is thin, overstretched and sometimes boring.

The main hero, Andrei (Oleg Yankovsky, with a strange blond patch on his black hair), is a symbol for the director himself who feels isolated in Italy (he cannot speak their language properly, his neighbors ask "what he is doing here"), longing for his homeland and childhood, presented with scenes filmmed in black and white, adding a few philosophical observations about differences between the Western and Russian mentality, culminating in the allegorical final scene (Russian landscapes "inside" Italian buildings) that advocates imigrants to merge those two worlds together. Too little happens in the film, both in content and style, to fully justify its hype, yet it has at least two virtuoso directed sequences: in one, Andrei has a childhood memory of a German Shepherd running through a puddle, and then goes to his room and lies down on the bed. While it is raining, the (imaginary?) dog suddenly enters his room and Andrei strokes him for comfort. In the other, Domenico gives a powerful speech about the wrong turn society has taken ("What kind of a world is this, when a madman has to tell you to be ashamed?") and lits himself on a statue in the city square, with Eugenia running towards him while every other passerby around her is "frozen" on the stairs, giving the impression as if she is walking inside a painting.