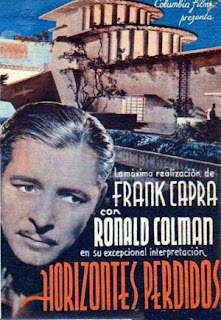 English writer, soldier and diplomat Robert Conway is sent on a mission to save 90 westerners in the Chinese town of Baskul from the violent uprising. As Robert, his brother George, Gloria and two other men board a plane, an unknown Asian pilot breaks into the cockpit and flies them off towards the Himalayas, where they crash due to lack of fuel. They are found by a group of people and brought to Shangi-La, an idylic town on a warm climate, surrounded by the mountains. Their tutor, Chang, explains that Shangri-La is suppose to be a refuge from the civilization heading towards self-destruction, and that Robert was brought to replace the dying High Lama. George persuades Robert to leave, but the latter eventually returns to the place, having found his inner peace there.

Despite Oscar nominations for best picture and supporting actor (H.B. Warner), critical acclaim and noble efforts of the film institute to restore the movie to its original length (its current running time of 130 minutes indicates that over an hour of the film was lost), Frank Capra's adaptation of the novel "Lost Horizon" is one of his lesser efforts, a simplistic morality play where the director embraced his common themes of good people in an evil world via the story of a sanctuary (Shangri-La, situated and isolated between the Himalayas in the story, but still having impossibly warm climate and even moderate climate animals like deer) for the good, transparently implying how this is the way the whole world should be. The most was achieved in the finale, where the protagonists are walking through the snowy landscapes of Himalayas, stylistically as monochrome as dunes in Lean's "Lawrence of Arabia", whereas the set-design is truly extraordinary for those times, giving great landscapes where Shangri-La is placed, but some ideas are still naive or weird (attaching flutes to pigeons tales so that they would make a sound of music while flying). More care was dedicated to the themes than to the characters, yet hero Robert does give a few good lines here and there ("If life does not have a purpose, why strive towards living as long as possible?"). As the last line hints ("I hope he finds his Shangi-La. I hope we all find it."), the city is not just an utopia, but also a state of mind, and thus a valid attempt from Capra and his screenwriter Robert Riskin to present their philosophy, yet it is humorless, unexciting and thin, clashing with perspectives and notions, but is overall less a pure insight into the human spirit.