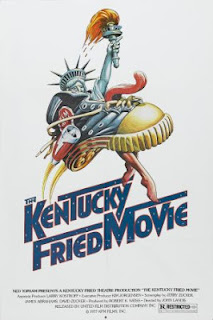 Several clips from TV: an energy expert talks about a new method of oil extraction, namely from the teenager's acne...a gorilla goes crazy during a talk show...a man goes to a see a movie in cinema equipped with 'Feel-A-Round', which means that the usher will re-create and channel everything on screen towards him...in a movie, "A Fistful of Yen", martial arts expert Lou goes to fight against the evil Dr. Klahn and his henchmen...a trailer announces a new disaster movie...an educational video shows what the life would look like without zinc oxide...a guy and a girl get intimate in their home, but the TV news announcer can see them and just pretends to read the news while watching them.

A rudimentary forerunner to the parody genre, the first writing effort of the comic trio consisting of Jerry Zucker, Jim Abrahams and David Zucker, "Kentucky Fried Movie" is a highly uneven achievement encompassing some twenty (TV) sketches that vary from tasteless garbage to actually more sophisticated satire, which is why the movie had a bipolar reception. The first five segments are the worst, and it isn't well into the sixth one, 'Feel-A-Round', until the comic spark really ignites, despite director John Landis' efforts, whereas even though it is somewhere considered to be the ultimate Bruce Lee parody, the longest segment, a half hour martial arts spoof, "A Fistful of Yen", is only able to cause a few chuckles at best and is easily overshadowed by the equally shaky, but ten times funnier comedy "Kung Pow: Enter the Fist". The best jokes were surprisingly saved for the last 30 minutes, which are the comic highlight of the movie. The segment where Henry Gibson calls for donations for his association, "United Appeal for the Dead", which has such members as a mom and dad who still have the corpse of their dead boy Johnny ("Three years ago, our Johnny died. We thought there was no hope, but the United Appeal showed us that despite his handicap, Johnny could still be a useful member of our family.") is a hilarious grotesque, as well as "Willer Time" and "Zinc Oxide" educational video. And the last joke is naughty, but the best: in it, a guy and a girl start cuddling on the couch while a news anchor is reading news on TV. But all of a sudden, as much as they could see him, he also sees them, and starts pretending to speak 'monotone' news and secretly observing them while they are nude, whereas Zucker-Abrahams-Zucker appear also on TV as his technicians, equally curious about the couple.

It's still a fun movie.

Yes, at least in the last 30 minutes. Despite a lot of mixed jokes, the last one, involving that TV anchor "breaking the fourth wall", still makes me crack up just by thinking about it.