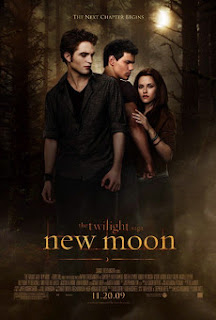 Thinking that their relationship will lead nowhere because he is a vampire, Edward departs from the city with his family, leaving the 18-year old Bella alone and depressed. Out of caprice, she starts seeking cheap thrills and hanging out with Jacob Black - but he turns out to be a werewolf. After a lot of misadventures, Edward and Bella reunite since he only left her to protect her. Bella agrees to become a vampire herself, but that will inevitably breach the peace pact between werewolves and vampires, since the latter promised not to bite any humans. Edward nontheless proposes her.

From today's stance, it is hard to figure out why the "Twilight" movie saga caused such a hype nor why did millions of teenagers fall for such a transparent story. While the first movie had at least some sense and charm, resulting from the romance of two outsiders, part II, "New Moon", is so thin that it could only make the viewers feel like in a "Twilight Zone". One wonders how so little content, so little story can be stretched out into a running time of 130 minutes when it could have served as a fine short movie: "New Moon" is a soap opera, a movie that is so empty that it has no meaningful dialogues, no events, no humor, no tangle - and even no suntan for the two protagonists, either. The most interesting part of the movie is that Edward departs, leaves Bella and is absent for almost an hour from the storyline, which causes a rather fine mood that explores Bella's depression from loneliness, as well as her reckless, almost suicidal thrill events through which she almost neurotically tries to cause Edward's intervention, his return so that he could save her. The always good Graham Greene almost steals the show here and there in his small role of Harry. But that is it, and it is too little to compensate for the uneventful rest of the movie, which quickly returns back into the standard ludicrous mode of a crazy rivalry between vampires and werewolves. Still, even though it has only one truly great scene, it deserves to be mentioned: while Bella sits in her living room, the camera circles around her three times, each time passing the window in front of her that each time shows different seasons outside, from leaves falling in October up to snow covering the exterior in December.