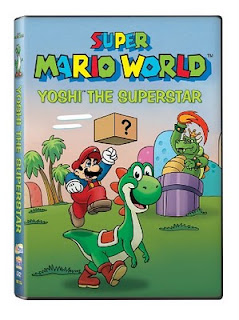 Plumber brothers Mario and Luigi now live in prehistoric world inhabited by dinosaur Yoshi and cave people. They try to arrange it by their birthplace New York. They again protect princess Toadstool from reptile Bowser Koopa and his kids Cheatsie, Kooky, Hip, Hop, Bully, Kootie Pie and Big Mouth. In numerous adventures, Mario invents the telephone and the wheel; Koopa stages a circus or an improvised TV-station; whereas Luigi tells Yoshi how they met...

The final American animated series about Mario, "Super Mario World" is considered better than the weakest, first cartoon, "Super Mario Bros. Super Show", but a step back when compared to the arguably most engaging TV show, "Super Mario Bros. 3". Once again, it's a pity that such animated series depend on the changes of the authors of the video games, which makes them inconsistent and it turns out they are playing more with the feelings of the fans of the heroes than with the video games: all of the characters' relationships from the previous two shows are here completely eradicated. Still, the prehistoric dinosaur world is wonderfully cheerful whereas they ironically did well when they replaced the slightly annoying Toad with incredibly sympathetic Yoshi, who is a much better sidekick. "Super Mario World" has only 13 episodes with a 10 minute running time and is thus easily watchable.

One must also mention the music, which is the best of all three Mario animated shows. Unfortunately, the animation and the jokes are bland, some of which even borrow from "The Flintstones" (a lizard as a pipe wrench), while the story doesn't have a beginning or an end. That way it all stays just "hanging there". Too bad. The authors demonstrated excellent potentials only in two episodes - "Mama Luigi", written by Phil Harnage (an irresistibly sweet episode that is incredibly adventurously fun in showing how Luigi met baby Yoshi, riding on dolphins, drying his hat and commenting: "Compared to this dinosaur, Mario eats little.") and "Gopher Bash", written by Brooks Wachtel (culminating in Cheatsie's ontological cynical line "Don't just help him, stand there!" as well as "cartoonish" facial expression after he sees Mario, Luigi and Yoshi) - and to some extent in episodes "The Wheel Thing" and "Send in the Clowns", yet the rest is just standard fluff with mild inspiration, lacking that real spark that does not completely exploit the melancholic possibilities of the two plumbers who have to chose between theirs and this world, though it is a watchable, harmless solid fun with a few interesting "abstract" moments, as always when Mario and Luigi get their super powers.