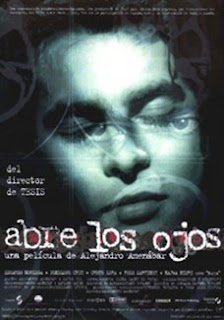 Cesar, with a mask on his face, tells his story to a psychiatrist: he was a successful businessman, attractive, rich, with a lot of a women for one night. His last lover is Nuria. On his birthday, he meets Sofia, the girlfriend of Pelay. Nuria is jealous so she brings him along for a car crash; she dies, while his face gets mutilated. From there on, Sofia avoids him...But suddenly, she starts loving him again and the doctors restore his face. When he spots Nuria, he kills her. He and the psychiatrist go to L.E., a company that can hibernate life. Cesar realizes that he actually lives in a dream: he signed a contract in L.E. and in the year 2145 voluntarily went into a machine that creates an artificial, pleasant memory-dream world in his mind. He jumps off a building and wakes up.

A semi-forerunner to Nolan's "Inception", "Open Your Eyes" is an interesting little science-fiction film involving dreams where director Alejando Amenabar likes sudden twists and leads them skillfully and precisely, but they don't fit in entirely. The story is the best in the first half: the superficial hero Cesar falls in love for the first time, in Sofia, who is played excellently and shrill by Penelope Cruz. There's a nice scene in her apartment that wonderfully displays her charm, when she draws a caricature of him in the form of a "dude" with a car and a bunch of money, while he made a serious-realistic portrait of her. The plot twist, that transports it from a normal into a fiction story, is rather problematic; namely, it turns out his whole life, presented in the film, is an artificial dream. The film has a great style and the dreamy scenes, with grainy cinematography, are the most realistically conceived and close to a real dream to date, yet the concept carries a crucial problem: it is revealed only 5 minutes before the end of the film. And that is a problem. Even "The Truman Show" and "Groundhog Day" had great unusual stories, but they did not set in just 5 minutes before the end. This way, unfortunately, "Eyes" did not exploit all the possibilities and is closer to the one-note concept similar to "The Sixth Sense" than to the above mentioned two films.

I located you guys on the internet because
I saw a movie a couple of months ago and I need to know the name. It had a crazy italian family and the son brings over his girlfriend who is Jewish. The scene takes place during dinner. The mother begins going crazy and starts yelling, the girlfriend begins to fight with the mother. The couple leave and go to the beach (or maybe a parking lot) then it ends with them screaming at each other. I believe these actors were a couple in real life. Please help.

You can reply to shaynatural@yahoo.com