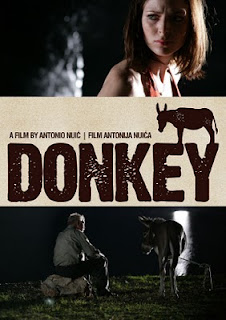 Croatia, a few days before Operation Storm. Boro, his wife Jasna and their son Luka arrive from Zagreb to a small village in Herzegovina to visit the place where he was born. Once there, Boro discovers that his brother Petar, who managed to escape from the siege of Sarajevo, is now in wheelchair after he was injured. In the meantime, the old Ante persuades an old woman to transport a donkey to his estate so that he can try to sell it for her. Boro is anxious, ignoring Jasna because he wanted her to give a birth to a daughter for him. But there's more: Jasna discovers that Paško, Boro's aggressive and abusive father, drove his mother to suicide. Boro finally confronts Paško who confesses him that he never loved his wife but that the marriage was already arranged. In order to try to make it up for his behavior, Paško buys off the donkey for 1,000 Euros to cheer up Luka who pitied the animal. As the family leaves back for Zagreb, Ante now has both the money and the donkey.

The talented director Antonio Nuic didn't demonstrate a lot in the pale, thin drama "Donkey", a film that is as unattractive both in its title as well as in its content. After a great, stylish intro involving just a panorama shot of a long queue of soldiers walking up a road on a hill, "Donkey" comes to a virtual standstill because it has almost nothing to offer than the already a thousand times seen story about a man, Boro, in an argument with his wife and his father. In one scene, Boro drives his brother Petar in a wheelchair, until he looks at the sky at night and says: "Look at the sky. It's as if you can reach out and touch it!" - that is bland writing, and unfortunately the majority of the dialogues is equally as (un)inspiring. It's not a good sign when already half-way into the film you notice that it has only 3 interesting moments. Also, the setting of the story during Operation Storm is completely irrelevant to the plot: when they hear on the radio about it, they act as if nothing happened. That is not a natural reaction. Here and there only the kid actor Roko Roglic manages to steal the show and lift the film up a bit, like in the scene where he is looking at the donkey standing in night - his father then has this amusing dialogue with him: "What are you doing here so late at night?" - "The donkey is bored." - "Why do you say that?" - "Because it is not sleeping." - "It is sleeping." - "But it's standing!" - "Donkey's sleep while standing!" - "But its eyes are open, he is watching us, he can't be asleep!" The amusing end, a resolution to the dramatic conflict involving the donkey, is charming but also overrated and not half as good as it should have been to be a real payoff for the film.