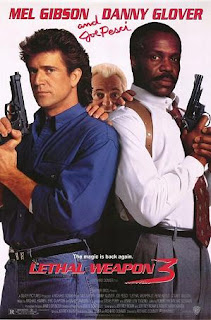 Police Detective Murtaugh has only 7 days left before retirement, but his partner Riggs uses a pocket knife to cut the wrong wire while trying to deactivate the bomb, which is why it goes off and blows up the whole building. The duo thus gets degraded to street patrol. Still, they get promoted again when they stop a bank robbery and get a new partner, Lorna Cole. Their new enemy is ex-cop Jack Travis who sells special bullets, that can penetrate bullet-proof vests, to criminals. Murtaugh and Riggs are also again annoyed by the fast talking Getz. Riggs and Cole start a relationship and kill Travis, whereas Murtaugh changes his mind and postpones his retirement for a few years.

The third part of the "Lethal Weapon" series somewhat schematically repeated the tried formula of a blend of action and humor, yet due to a bigger budget and crystal clear cinematography is seems more glamorous - and has more broken cars. The oscillation of quality will continue even in part 4 due to overcrowded characters in the story, and it is a problem here, too: the new character addition, played by Rene Russo, did not receive some especially good dialogues whereas Joe Pesci got an unthankfully written role of a goon who gets humiliated by everyone. However, the opening, where Riggs goofs while trying to deactivate a bomb in a building, is hilarious, whereas his cynicism is continuing in the scene where he puts a bag over a parking machine or when he talks with Murtaugh's daughter over the phone ("Hi, honey! Where are you, I miss you..."). This third film is somehow more relaxed than the predecessors and contains good action sequences (i.e. Riggs shoots at the gasoline in the air, it ignites and falls on the bad guy), with a lot more humor, which is why this is still a good film.