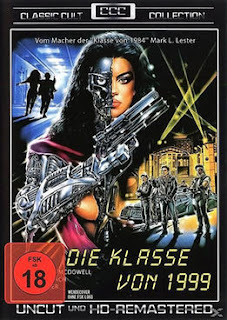 In the future, high school violence has gone out of control in some areas in America. One teenager, Cody, is released from jail and returns to his Kennedy high school, but is shocked to find three new teachers—Mr. Hardin in history class, Mrs. Connors in chemistry class and Mr. Bryles in physical class—who actually beat up students in order to bring order and discipline during class. Two students even die from beatings. Together with Christie, the Principal's daughter, Cody discovers that these three teachers are actually androids, humanoid robots used by the military to launch a new discipline program nation-wide. Upon getting caught browsing their apartment, Hardin, Connors and Bryles decide to persecute Cody. First they kill his brother, Angel, and then kidnap Christie. Together with a gang of teenagers, Cody manages to save Christie and destroy robots in the school at night.

This bizarre syncretism of "The Terminator" and high school juvenile delinquents films achieved cult status, yet did not hold up well with the flow of time after 1999, since it is obviously a simplistic, sometimes even trashy action flick that cannot aim to be something more than a 'guilty pleasure'. "Class of 1999" observes a clash between extreme anarchism and extreme authoritarianism, yet pretty much avoids trying to give an in-depth analysis, instead settling for the shallow exploitation film where the actions and decisions of the characters are only there for someone to fight. The three android teachers look too human (especially Mr. Hardin who even smokes a pipe!), and thus never fool anyone that they are robots, except in the finale when they reveal their robotic parts (including Mr. Bryles taking off his hand to reveal a cannon underneath it) and which almost directly copies the finale in "The Terminator" (featuring the only visual effects sequence in the entire film, the stop-motion of Mr. Bryles with half of his flesh gone, revealing his robotic interior, as he walks after Christie and thus Cody has to attack him with a forklift truck). Critics also attacked the film for inciting a violent clash between students and teachers, which was not seen positively from the educational sector. Still, at least the movie is not sterile, since it abounds with several bizarre moments, some of which are so strange that they deserve to be seen (for instance, when two students interrupt the history class by fighting, Mr. Hardin takes one of them, sits on the desk and publicly spanks him in front of the entire class). Among the three android teachers is Pam Grier, who at least somewhat manages to salvage the confusing impression thanks to a few sequences where she uses her "karate moves" to beat up students into obedience.