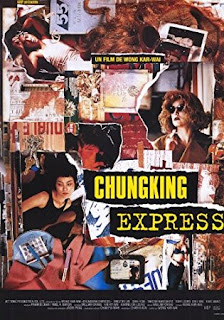 Two stories from Hong Kong: while going after a criminal, police officer He Qiwu, number #223, encountered an unknown woman with a blond wig for the first time. She organized a drug smuggling business that failed, which left her very upset. Qiwu is sad because his girlfriend May left him on his birthday. Qiwu meets the blond wig woman and they fall in love... Faye, a saleslady in a small snack bar, falls in love with police officer #663, but is too scared to do something directly due to her short hair. When a woman, a flight attendant, breaks up with the said police officer, she leaves him a farewell letter and the keys to his apartment at the snack bar desk—which thus land in the hands of Faye. She uses the keys to secretly enter his apartment and clean it. One day, he catches her in his apartment, but she runs away. A year later, after Faye returns from California, she is now a flight attendant, and the infatuated police officer meets her again.

A lot of critical recognition was aimed at director Wong Kar-wai, and not without reason, since his unusual two-story romantic drama "Chunking Express" is an impressive, gentle, emotional and melancholic little film. The film consists out of two stories—the 1st one that lasts for 40 minutes, and the 2nd one for 60 minutes—which are unconnected, featuring two different protagonists, and this peculiar direction may puzzle some viewers: different and 'discreetly eccentric', it is still a successful drama the way it is, where the cinematography has a lot of aesthetics, but the characters are the main highlight, and that is its principal virtue. While the 1st story has its merits, the 2nd story is the "real deal", featuring a romantic "proxy poke" concept so sweet that not even "Amelie" would be ashamed off, the one in which a girl, Faye, accidentally obtains the apartment keys to the guy she is in love with, and thus secretly enters his apartment while he is away, trying to leave clues to him. The characters are wonderfully shrill: police officer #223, for instance, was born on 1 May, so he buys cans with an expiration date of 1 May, whereas police officer #663 tells a vet mop, which leaks water, not to cry. Superb song "California Dreamin'" is featured six times (!) throughout the film, whereas the final song, "Dreams", is sung by actress Faye Wong, assembling an unusual cavalcade of emotions, and circling out its unique melancholic mood.