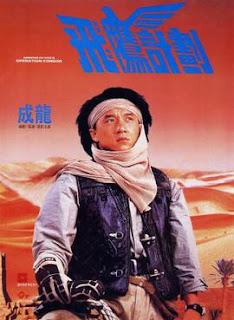 Madrid. Adventurer Jackie is given an assignment by a certain Baron to find 240 tn of gold which were stolen during World War II and buried somewhere in the Sahara by the German commander Hans. Teamed up by Elsa, the granddaughter of Hans, and Ada, the trio travels in jeeps south, to the desert. They are attacked by two Arab men as well as mercenaries, while they meet another woman who joins them, Momoko. They finally discover a tunnel which leads them to the underground base, but are taken hostage by the mercenaries led by a man in a wheelchair, Adolf, the last remaining soldier who survived Hans' poisoning of his team. They find the gold, but the self-destruction mechanism of the base activates. Jackie and the three women manage to escape through a wind turbine before the explosion, but are now lost in the desert.

Even though it was not that well received by the critics, "Armour of God 2" still works as a fresh and elegant action comedy even today, featuring once again all the super-fast and meticulously choreographed battle and martial arts fights by Jackie Chan, who here also took over the control on the director's front. Intended as a light homage to the "Indiana Jones" film series, as well as an often tradition of Hong Kong films filmed in exotic locations around the world (in this example, the Sahara), "Armour of God 2" still finds its own style. It works the best in the first half, which features both inspired action (the highlight is arguably the long chase sequence involving Jackie on the motorcycle, which includes him saving a baby cradle from the street, just before a truck crashes into two cars on that spot) and outrageous slapstick comedy moments (the long "hostage" sequence in which Jackie fights mercenaries in the hotel room, all the while using Ada's towel to distract the enemies, until, in the end, a naked Ada "hides" by entering inside Jackie's pants and jacket from his back, so the two of them walk together by sharing the same clothes). Unfortunately, the second half is much weaker and loses a lot of its initial level due to forced or spasmodic humor, falling all until the action finale that returns it back into shape. The silly story is, once again, basically just an excuse to have Jackie Chan go on an adventure to fight the bad guys, the "incomplete" ending feels rushed and unfinished whereas the supporting character of Momoko plays no role in the story, yet the enormous set pieces and aesthetic images of the sand dunes still manage to compensate for the omissions: one of the best jokes is the giant wind turbine in the finale, in which Jackie shouts "Superman!" as he jumps and let's the wind push him to fly off into a wall in the underground base, showing that he still has that charm and wit, even when doing sequels.