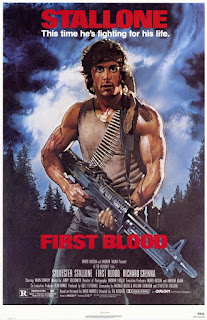 John Rambo, a retired Vietnam war veteran, arrives at a hut to visit his old war colleague, but finds out he died from cancer. Wandering aimlessly, Rambo arrives at a small city, but the local Sheriff, Will, escorts him out before he can even step foot in the place. When Rambo heads back to the city, Will arrests him. The police officers are brutal, and they bully Rambo until he snaps, beats them up and escapes to the mountain. Will assembles a team to kill him, but Rambo ambushes many of his officers in the forest, instead. Escalating more and more, the situation reaches a critical point when Rambo steals a military truck, gets a weapon and starts shooting across the town, killing Will. However, Rambo's former commander, Colonel Trautman, persuades him to give himself up to the police.

Even though Sylvester Stallone made over 80 films, he will arguably be remembered for playing only two characters: Rocky and Rambo. Even though it suffers from various problems, inconsistencies and an elision of common sense — the cause for the conflict between Sheriff Will and Rambo is as convincing as the one in "Batman vs. Superman", since in both their trivial misunderstandings could have easily been solved by simply talking to each other as grown ups — "Rambo" still tries to deliver a commentary on the post-war mentality of war veterans, giving a sly message: war veterans only know how to fight, but while that is required from them during war, once peace returns and they are back in their society, they (and their urge to fight) seem misplaced and inappropriate. This is evident near the finale, when Colonel Trautman talks to Rambo and tries to persuade him to finally stop fighting, but he just replies with: "Nothing is over! Nothing! You just don't turn it off!" This speaks volumes about people who are stuck in one state and are unable to move on. "Rambo" also seems to be a critique of "Dirty Harry" and the "shoot first, ask later" mentality: it shows such tendency in the authoritarian Sheriff Will and his officers, who communicate only through violence and bullying, arguing that this extreme right-wing behavior leads in a dead end, in a state of endless escalation from people who fight back. Despite its somewhat rudimentary approach, "Rambo" advanced into a cult film and became the voice of the 80s, capturing its flair and mood, featuring an exciting score by Jerry Goldsmith, spanning a whole mythology of American "one-man-army" heroes during Reagan's era. Despite its more dramatic (and tragic) look at violence and action (throughout the entire film, Rambo kills only two people, and mostly avoids his defences being fatal), the film was followed by three sequels which abandoned the original vision and embraced violence and action as pure, carefree fun, even though critics didn't approve.