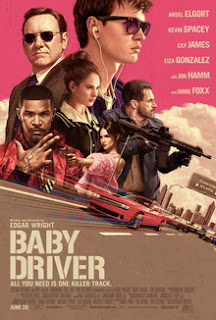 Baby is a young guy whose job is to be a super-fast getaway driver as soon as bank robbers enter his car, in order to evade the police chase. He works for the mysterious gangster Doc in order to repay his debts, and the team members are constantly changing for each new robbery. Baby survived a car crash which left his parents dead, but left him with a tinnitus in his ear, so he always wears headphone to listen to music to help him forget the noise. After his last job, Baby wants to start a new, normal life and asks a waitress, Debora, out for a date. However, Doc orders him to return to the world of crime again. A robbery goes wrong and two get killed. Baby thus kills one gangster, "Buddy" and tries to escape with Debora, but is arrested by the police.

In a decade when many lost all hope in the future of film, which many feared found itself on the rocks due to constant, routine sequels, prequels or remakes, director Edgar Wright struck the screen like a lightning bolt: his film "Baby Driver" is an untrammelled, dazzling and refreshing piece of filmmaking with style that grips the viewers and never let's go. Wright crafts the storyline with so many twists of cliches and surprises that you never know what might happen next: one moment a gangster character poses such a threat that the tension is electrifying, and the next a daft, innocent joke shows up and causes a big laugh. Unlike many films that are going to unravel according to the A-B-C-D scheme, "Baby Driver" unravels around his own A-Z-H-R-X-B scheme, and such an unpredictability gives it spark and vitality. The way one of the villains, "Bats", gets eliminated, for instance, is so creative it is simply pure genius and you never could have seen it coming.

One must also recognize Wright for his genius dialogues, which are abundant ("He puts the "Asian" into "Home Invasion"!"; a gangster has a heart sign next to his tattoo of the word "Hat" to cover up the "e" at the end; after "Bats" constantly tries to intimidate everyone with his erratic behavior, "Darling" finally tells him: "You think you're the last word in crazy? Well you're not!"). The film creates excellent characters and then let's them clash with each other, whereas a very good support is given in the sympathetic protagonist Baby (Ansel Elgort) who is an untypical, peculiar guy, but with his heart on the right spot: he just wants to get out of this criminal world and lead a normal, everyday life so that he can drive cars. The film is so playful that even some gun shots are synchronized in tune to beats from a song. Naturally, despite all this, the story is still a sly morality play, in the end showing how the life of crime may be tempting and easy at first, but that it ultimately leads to huge consequences. Wright previously directed small, independent films, and it is so refreshing to see that he managed to direct a big budget film and still stay faithful to his cheerful, humorous identity. Super-fast action films are a dime a dozen - but action films with sheer ingenuity, intelligence, wit and inspiration are still very rare. This is one of them.