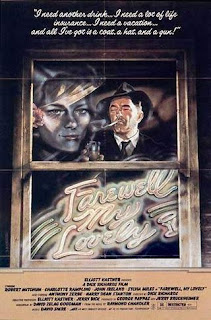 Los Angeles. Private detective Philip Marlowe is hired by the giant Moose, an ex-convict, to find his girlfriend Velma from whom he hasn't heard from for seven years. He also gets another assignment from Marriott, who wants him to deliver ransom money in exchange for his stolen necklace. When Marriott gets killed during the exchange, Marlowe becomes the main suspect. He is also shot at several times, and suspects it is a warning to stop investigating. Marlowe finds out that Velma lives a luxurious life under the name of Helen, married a judge and is the owner of the necklace. She betrayed Moose a long time ago in exchange for a large reward, and now cooperates with gangster Brunette. In a yacht, Velma shoots Moose, while Marlowe shoots her and contacts the police.

The third film adaptation of Raymond Chandler's detective novel "Farewell, My Lovely", Dick Richards' 1975 film is a 'film noir light', without much sense for the genre's mood or style, offering the famous character of Philip Marlowe in a rather placid edition, though a strong connection to his golden movie phase achieved with "The Big Sleep" was established thanks to a sovereign, charismatic performance by the always competent Robert Mitchum, who reminded of the classic age of Hollywood. The story tends to overcomplicate, yet the main storyline is basically simple - a man, Moose, wants to find the woman he loves, but she doesn't want to be found because she betrayed him and never liked him in the first place - and thus dwells on several themes about the human relationships and money that causes them to feign something they are not. The film is heavy handed and 'rough' on several instances, rushing to the conclusion without much time to truly help those supporting characters shine, yet Marlowe is once again deliciously 'cool' and cynical at times: for instance, after a black man was murdered in a pub, Marlowe waits for Detective Nulty and the police to finally show up on the scene, and greets him with the following words: "35 minutes. That's not bad for a killing. Lucky it wasn't something serious." In another instance, he persuades Nulty to throw out his assistant from the office, commenting: "Don't steal the doorknobs!"