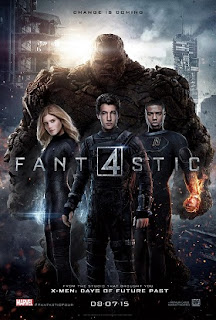 When youngsters Reed and Ben manage to assemble a teleportation device, they are given a scholarship by Mr. Storm to research in his Baxter Foundation institute. Together with Sue and Johnny, they manage to create a stable teleportation device. One night, Reed, Johnny, Ben and Victor secretly use it to teleport themselves into another dimension to investigate it. However, Victor is captured by an unknown green matter, and fails to return back to Earth. The rest, together with Sue, transform and gain superpowers: Ben becomes a rocky humanoid, Sue can become invisible, Johnny can turn into fire and Reed into super elastic body. A year later, Victor returns and decides to destroy Earth because he was left in that dimension. However, the Fantastic Four stop him.

The third movie reboot attempt of the "Fantastic Four" was met with surprisingly uncalled for and exaggerated negative response - among others, it has an average rating of only 3.4/10 on Rotten Tometoes - even though it is a perfectly solid superhero film, not much different than the rest of the films of that subgenre released at that time. Director Josh Trank tried out a different approach, transforming it into a dark drama that focused more on psychological states of the characters, and thus some fans felt cheated - after all, the storyline gave them only one action sequence, set in the finale - yet Nolan did the same thing with "Batman Begins", and thus such a disproportionate reaction of the critics is baffling. Trank didn't do much wrong - the only misguided moment is when Doom uses his powers to cause the government agent's head to explode in his suit - yet he didn't do that much right, either, and that is the "Fantastic Four's" weak link: it simply lacks highlights. The whole movie takes 30 minutes until its storyline finally sets in, and that bland intro is not compensated by some especially fun, memorable or genius scenes later on. The characters and the storyline are insipid, uninspired, sterile and standard, without that much ingenuity or humor to 'twitch' them from that grey existence. What could be said of Sue except that she is from Kosovo? What could be said of Reed or any of his nonexistent personality? One of the few exceptions is the comical race sequence near the start (after the signal, the three cars start driving full speed - except Johnny's which suddenly breaks and stops already at the start), yet those are just small crumbs of delight. Unfortunately, the studio re-edited the film before the premiere, which can be sensed in the abrupt time ellipse half way into the film - how much of the original vision was lost by that move, remains unknown, yet it damaged the film considerably.