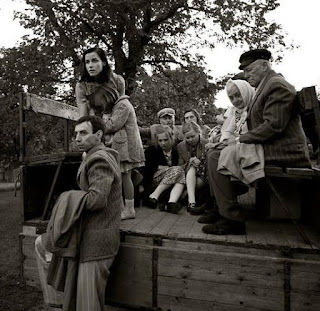 In '41, Goreshist Russia invades and annexes Estonia. In June, Moscow starts the ethnic cleansing of the Baltic states in order to create a Greater Russia and to have slaves who will work in Siberia. Among the victims is a young woman, Erna, who is deported on a vagon train with her daughter Eliide and seperated from her husband Heldur. A tenth of the women die during the long journey, sealed off in the train for 26 days. Erna sends letters to Heldur, describing how Eliide died from hunger, and how she and others how to work in Siberia. After war criminal Stalin dies, Estonians and other nations are allowed to return to their homeland again. However, Erna finds out Heldur was executed a long time ago.

The feature length debut film by director Martti Helde, "In the Crosswind" is a very poetic and dreamy depiction of ugly and nightmarish events, the June deportations. As an Estonian himself, Helde was faced with a challenge to stay neutral and immune while depicting such an injustice, the ethnic cleansing of about 200,000 people from the Baltic states, and managed to do it with an innovative movie technique: while all the scenes in Estonia are filmed in normal fashion, all the scenes where the main heroine Erna is dislocated from her homeland and living in Siberia are filmed in 'Matrix' style, i.e. the camera drives around the people, while they stand motionlessly. It is a wonder to look at, since 80% of the film is assembled out of these "frozen scenes", but it has a meaning - to show how life "stopped" for Erna and all those people who had a home, a husband and a family before, and were left suddenly widowed and homeless afterwards. The viewers see these "3D-stills", reminiscent of Marker's "La jetee" just with a mobile camera, and observe these stills - Red army soldiers holding a family on a truck at gunpoint; soldiers pushing families in trains; a child holding its hands over its ears; a husband gently hugging his wife and daughter for the last time at the train station; Red army soldiers aiming at prisoners before execution... - but are presented with a gentle protective dislocation by not seeing the whole picture, just a frozen glimpse of it. This way, the movie protects from too much sentimentality, from too much pain, because it skips the complete action of seeing the soldiers actually shot and kill the prisoners - but precisely because of such a sustained depiction, it is all the more subtly emotional and says all there is to say about the insanity and tragedy of Goreshism through ages. Assembled only out of the narration of Erna's letters, "Crosswind" is an intimate movie that demands a lot of concentration, but rewards, and sends an unassuming message about the inherent power of the small and good people to survive the big and the evil.