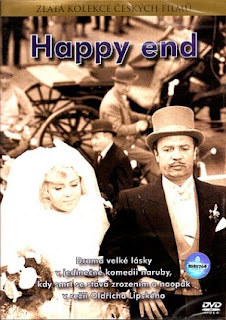 Bedrich's life is told in reverse, though he narrates it straightforward: the guillotine goes up and his head is attached to his body, bringing him to life, whereas the police officers and the executioner return him to his prison cell. The story goes back to when he was handed a death sentence, and to when he is released from prison. He finds himself with a suitcase and goes to his home to find the chopped up body parts of a woman. Using his knife, he "un-cuts" them and assembles the woman who comes back to life, Julia. As the narration goes further back, Julia is seen cheating on Bedrich with Jene, a man whom he saved from drowning. Their child gets unborn, they get unmarried and Bedrich returns to his previous wife. Finally, he returns to being a child.

A masterpiece of surreal-black comedy cinema, one of the best movies from the 60s, Oldrich Lipsky's 'reverse movie' "Happy End" contains such a dazzling and meticulously crafted storyline that later similar achievements such as "Memento" and "The Curious Case of Benjamin Button" seem like child's play in comparison. Lipsky crafts the whole storyline in reverse time, starting from the hero's death and ending with his birth, but the protagonist refuses to depict it as such and instead narrates it straightforward, which gives it irony and sharpness. However, the author went even a step further, and wrote an almost careful codification of dialoges which give a different meaning when the sentences are spoken in reverse chronological order, something not even Pietro Bembo would have been ashamed off: one example is the courtroom dialogue between Bedrich and the judge ("Yes, I did it." - "So, you have done it? Your denial is useless?" - "As I said before, I didn't kill anybody!" - "I am asking you for the last time: did you kill your wife and her lover?" - "I didn't notice anything." / "...You were born?" - "Not at all!" - "Any mental disorders?").

This was a conventional story—a man kills his wife and her lover out of jealousy—but by telling it in reverse, it became unique: the movie is virtuoso assembled, with a couple of incredible moments (the lover "falling up" from the street, through the window into the apartment, and as he is chased in reverse though the room by Bedrich, causing less and less feathers to fall from the pillow, the hero narrates how an "intruder" crashed through his window, but he "forced him to clean up"), with the humor stemming from oddball dialogues (as the fish are flying backwards from the seals into Jene's hands, the narrator says how Jene was "stealing fish from the animals in the zoo") or by director's method (Bedrich tripping with his suitcase in reverse). "Happy End" is highly artificial—everything is style, everything is exaggerated, the characters are all caricatures—but these concoctions conquer with an incredible intelligence and wit, and just like the grotesque characters in the movies by Fellini and the Coen brothers, they are still based on some truths from everyday life, which is why even moments with highly burlesque kind of black humor seem to be done with taste and class.