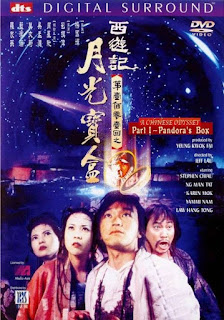 In ancient Asia, the Monkey King got annoyed by the endless babble of his master, the Longevity Monk, and thus abandoned him and even attacked the goddess Guanyin. However, the Monk insisted that she should give him another chance. 500 years later, the Joker is the leader of a bunch of thieves in a desert outpost. They are visited by two beautiful demon-women, Spider Woman and Bak Jing-jing, who are in search for the Longevity Monk in order to eat him and prolong their lives. In a chaos caused by the attack of the demon Bull King, Jing-jing commits suicide. In love with her, Joker uses Pandora's Box to travel back in time in order to save her, but goes 500 years back in time. There he meets a fairy, Zixia. He teams up with Pigsy, Sandy and the Monk, who claims that Joker is the Monkey King and that their destiny is to go fetch Buddhist sciptures in India to spread Buddhism in China. Joker refuses to believe this, but Jing-jing abandons him since she senses he loves Zixia. Joker finally transforms into the Monkey King, battles the Bull King but Zixia dies. In a desert city, Monkey King spots the reincarnations of Joker and Zixia, and helps them embrace each other. The Monkey King then leaves with Monk towards his journey.

A set of two films, "A Chinese Odyssey I: Pandora's Box" and "A Chinese Odyssey II: Cinderella", this is one of the most unusual achievements from the Hong Kong cinema, in an impossible blend between silly slapstick, serious drama, lush fantasy elements and inconceivable action stunts. Even though at first glance this may seem like a mess, "A Chinese Odyssey" delivers a surprisingly measured and even balancing act between these four elements, and refuses them to clash with each other - instead treating each one as an equal ingredient of its own - thereby assembling an opulent, rarely experienced mood that secured it cult status. The opening act seizes the attention of the viewers thanks to the comedy elements that are not afraid to go over-the-top at full speed: the Joker (excellent Stephen Chow) wants to attack the demon woman in the bath and tears the axe hidden behind his back, but this causes his pants to fall down; in the next scene he is walking with his hands when chased by a giant spider demon at night and when his pants go in flames, his dumb assistant tries to extinguish them by pounding his crotch with his leg. If this may seem like a stupid comedy at first, it quickly makes a transition to fantasy and drama elements. The first part is thus excellent, and as a bonus offers one of the most romantic moments of the 90s: when the crying Jing-jing is holding her head down on her knees, she puts Joker's hand on her shoulder, giving him a hint that he should try to comfort her. She continues crying, but puts his arm around her shoulder. Finally, she stops crying and embraces him. They start passionately kissing and undressing. However, Joker's knot on his belt will not go down, and Jing-jing helps him, but suddenly stops, and resumes crying, upon which he gives up because she is now fragile again. This switch from comical to romantic melts you away.

The second part, "Cinderella", is weaker and slightly suffers from a 'rough' structure: the sudden disappearance of Jing-jing and her replacement with Zixia seems weird; there is less rich ideas in it and it takes for too long until the final action battle starts. However, some jokes even here catch you off guard (the demented scene where the Longevity Monk suddenly starts singing The Platters' song "Only You" (!) with different lyrics to persuade Joker to join him on his destiny, because "Only You can bring the scriptures..."). The bizarre creatures, loosely based on the Chinese classic novel "Journey to the West", may seem totally out of place for anyone not familiar with these mythologies (Bull king, Monkey King, Pigsy...), yet this just gives the film unique flair. The set designs are astonishing for the audacity of the director Jeffrey Lau to try to achieve anything even though he hasn't got a Hollywood budget at his disposal, and the fantasy scenes really do work (the blue fog in the background, while red colors are seen on Monkey King's face at night; the "floating" piece of rock on which Monkey and Bull King are fighting; the unusual camera angles and zooms...), or it may just be that Asian films can get away with some extravagant features Western movies cannot. The ending is also untypically sad, with some contemplations about the possibilities of having two options at the same time. Despite the fact that part II is weaker, this is a remarkable epic that manages to be light and deep at the same time, with a wonderful pace and great actors, all completing a bigger picture: it has some deep themes about the hero's conflict between his private life and his destiny; between what he wants from life and what life wants from him, thereby encompassing some Buddhist messages: only by seeing the two films until the end can you get the full impression and grand vision of what the director was intending to say.

One of my favourite Hong Kong moves! A classic which is very popular in China.

I was surprised when I "discovered" this film. I did not know what to expect. It was so strange and unusual, but had a seal of irresistible charm and positive energy to it that made it enjoyable. And it is also very fun, as well.