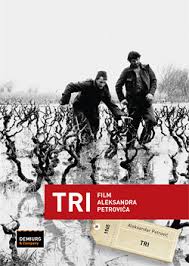 Yugoslavia during World War II. The young Miloš encounters death three times: while hundreds of peasants are waiting for a train to bring them food and evacuation, Miloš is a student and observes how partisans wrongfully accused and shot a reporter, suspicious of his foreign accent. However, his wife and child show up and confirm he was innocent... As a partisan, Miloš is being chased by a Totalitarian Nazi unit through the forest. He meets another partisan and they head towards the sea. The two of them separate in a swamp, but the other one is caught and sent into a burning house to die... Near the end of the war, Miloš is a high ranking partisan officer. Several Axis collaborators are brought to his outpost, and he is unable, or unwilling, to save a girl among them from the firing squad.

One of the prime examples of the Yugoslav 'black wave' - among others, it was even nominated for an Oscar for best foreign language film, only the third (ironically) Yugoslav film that managed to do so - "Three" demonstrated director Aleksandar Petrovic's poetic touch, and thus it is not really a typical partisan World War II film, but instead a dramatic essay about the hero's three encounters with death, which is timeless. The three part story jumps from segment to segment abruptly, and only lasts as long as its theme is encircled. The first segment is chaotic (unnecessary scenes of a gypsy performing with a chained bear on the train station to entertain the partisans), yet it is interesting the protagonist Miloš (Velimir Zivojinovic) appears only briefly in it, and the death of a "suspicious" man, who is labelled a "fifth column traitor", is perpetrated by the partisans themselves, which is quite brave and unorthodox compared to the Yugoslav partisan genre where they were showed almost exclusively from the positive side at that time. The story is good, but not outstanding. The second segment, where Miloš is being persecuted by a Nazi unit through a forest, is arguably the best in the film, since it strikes a perfect balance between black poetry, realism and emotions. This time, death appears closer, to someone he grew an emotional connection to, since his new friend, a partisan, is executed. The editing and pacing are meticulous there, and the grim finale is expressionistic. Ironically, just as the partisans were perpetrators in the first story, only to become victims in the second story and the Axis forces taking the role of the perpetrator, in the third and final segment the Axis forces become the next target of death, where Miloš can use his influence to save a girl among them. As the most crucial segment, it somehow falls flat: there is great chemistry between Miloš and the captured girl, established only through their looks, since they do not exchange a single word, but Miloš's passivity and indifferent stance fails to create an emotional charge to round up the story, and does not go in the right direction it could have went.