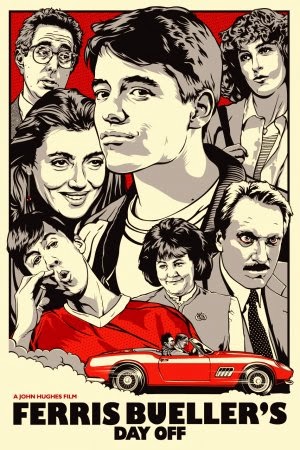 High schooler Ferris Bueller pretends that he is sick in order to skip school for a day and spend it with his girlfriend Sloane and friend Cameron, using Cameron's dad's Ferrari as a transportation vehicle. While the school principal Rooney suspects that Ferris is bluffing his sickness and unsucessfully tries to break into his house, Ferris, Sloane and Cameron tour Chicago  and go to a museum, a restaurant and a parade. When the car gets accidentally wrecked, Cameron finally gets self-esteem to stand up to his dad. Ferris returns safely home thanks to his sister Jeanie, while Rooney loses his wallet, car and shoe.

John Hughes' 4th film, "Ferris Bueller's Day Off" is quite overhyped and overrated, yet overall still a fun film with a few subtler and even emotional moments that carry the thin storyline. If we look at it as a film about Ferris who wants to spend the last day with his friends before they depart and possible never see each other again after high school graduation, it gets a more nostalgic dimension, especially since it can be viewed as an attempt to lighten up his depressed friend Cameron and show him to enjoy life and have a grand day out. However, their episodes are not always funny or memorable, whereas several scenes are far-fetched and have plot holes (for instance, it is hard to believe that in the restaurant scene the manager didn't simply ask for Ferris to present his ID or that Jeanie would not recognize and kick principal Rooney at her home, but would later address him by his name at the end) or cringe-worthy (the Charlie Sheen cameo), which overall makes the TV comedy show "Parker Lewis Can't Lose", the impersonator, better.

There is also a bizarre tendency of almost Totalitarian features involving Ferris, since *every* character in the film likes or adores him, and the only two characters who don't undergo a "treatment": sister Jeanie changes her mind all out of the blue and becomes his ally, while principal Rooney is punished as a scapegoat in a series of misadventures (he gets kicked, chased by a dog, loses his shoe in the mud...) which reach excessive and incorrect levels. Still, the film has funny moments, while one sequence is so beautiful and unexpected it is perfect, the one that plays out in the museum, where the three protagonists just silently observe paintings, almost as an ode to art, and ends with one of the most miraculous moments of the 80s, the one where Cameron looks at a girl on Georges Seurat's painting "A Sunday Afternoon on the Island of La Grande Jatte", and the camera zooms in on his and her eye, almost as if they have a personal connection despite a century separating them.