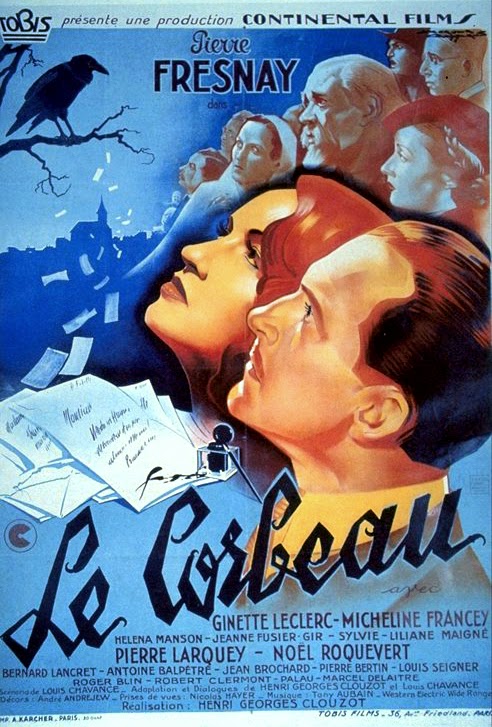 Remy Germain is a doctor in a small town, often accused of being heartless and cold while treating his patients. One day, angry letters start circulating around the town, accusing Dr. Germain of having an affair with Denise and Laura, the young wife of the older Chief Physician Dr. Vorzet, as well as performing illegal abortions. The letters are only signed with "The Raven". His life becomes unbearable, and the situation escalates when a patient commits suicide after receiving a letter that he has terminal cancer. In the end, Germain thinks he caught the perpetrator, when he finds the "Raven's" imprint in Laura's desk and agrees to sign a paper to send her to a mental asylum, upon the instruction of her husband Dr. Vorzet, who could not send her himself because they are married. However, Laura plea she is innocent, and Germain Dr. Vorzet dead on the table, with "Raven'" letter under him - he was killed by the mother of the killed patient.

Henri-Georges Cluzot's 2nd feature length film, "The Raven" heralded him as the next young hope of the French cinema, proving to be in his element with the crime-thriller genre that, it seems, works both as a Hitchcock and Chabrol at the same time, since he manages to paint a fine picture of the society using the crime story as a pretext. Not as suspenseful as much as it is intriguing with ease, this is an excellent little film about the effects of posinous gossip and envy, while the viewers are left guessing who among the characters might be the author behind the nasty letters circulating around the town and destroying the hero's reputation. There is a delicious little sequence at the start of the film, where Dr. Vorzot wants to confront his subordinate, economist Bonnevie, with "Raven's" letter, reading it out aloud to him in the office ("Watch out for that economist of yours, Bonnevie, because he likes to plot: he managed to set up a deal for his friend on the 15 January..."), but just then, Bonnevie takes out another "Raven's" letter himself, and tops it when he reads it aloud to him as well ("I hear you are friends with that abortist Germain. I suggest you to stay in good relations with him, because that old fool Dr. Vorzot is seeing your daughter Jeanette..."), which actually makes Dr. Vorzot uncomfortable. There is also a great sequence where all the suspects are rounded up, seated in a classroom, and ordered to write "Raven's" letters for several hours, in order for the authorities to analyze their signature. Cluzot has a natural way to engaging the viewers with ease, an impression that has not dated even today in this film, whereas the double twist ending is fantastic, leaving room for more than one conclusion to the story.