Dot and the Kangaroo 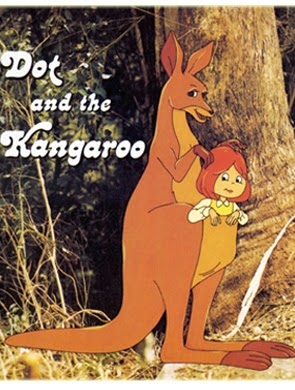 Australia. A little girl, Dot, wonders away from her farm and gets lost in the forest, but meets a kangaroo mother who lost her cub years ago. The kangaroo decides to help Dot find her way back home. They talk to the council of animals, who send them to talk to the platypus, but none of them knows how to help Dot. They are even attacked by three wolves. In the end, they find her home again. Dot is reunited with her parents, but when she turns back, she finds out that the kangaroo left because she knows she does not belong to the human world.

A gentle and good natured story, "Dot and the Kangaroo" has a distinctive feature that separates it from the mainstream trend of children's movies: it has the predictable and routine singing sequences, yet it is an original blend of animated characters and a live action environment in the background - which is very unique and creative - and takes care of avoiding the American traits, trying to stay faithful to its very own world of flora and fauna of Australia, even when it is slightly overemphasized (the overlong platypus sequence). The middle part has too much empty walk and banal, repetitive singing, yet the opening has charm and at least one universally acclaimed song, the extremely catchy and positive "Dot in the Pouch of a Red Kangaroo", which is so good it advanced into a small classic. As harmless as it seems, "Dot" has one of the most emotional and saddest endings of all times, whose sheer intensity is simply staggering: farewell endings were always a grateful mean to trigger an emotional reaction from the viewers, but few were so genuine as the one here. An ending so noble, so humble, so inexplicably compassionate, so mature in its simple children's presentation - is it so melancholic because it speaks about self-sacrifice? Or the inseparable gap between humans and animals? Or because a child can have only one mother? - it gives the film aura, and makes it more than the sum of its events leading up to it.

Certainly was quite a sad ending (though why they had to make more sequels I'll never know). Someone though I know pointed out the kangaroo they had during the end credits from the live-action footage happened to be male, though I suppose as a kid watching this, that would never come to your mind due to the gaffe.

Every film should be watched as a stand-alone story, and sequels may or may not fit into the cannon.

That's true, especially when you consider the original story itself was written at an earlier time in Australia's history (the book came out in 1899). The later sequels tend to place Dot in a more present day setting of when those films came out (1980's).